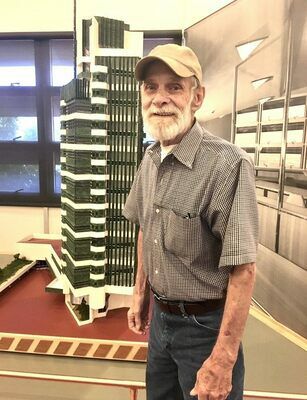 Carl Lorin Peres was born on March 16, 1948, in a farmhouse in rural Coffee County Kansas. That day had brought inclement weather and the horse drawn carriage that was to deliver him into the world had gotten stuck a few times, but blessed be the Lord, Carl was born; the son of Oren W. Peres and Norma Lee (Cheney) Peres.

He was raised with his two brothers and three sisters: Leslie Christianson, Frank Peres, Rita Bruner, Mary Garland and Evelyn Hicks. As a kid, he loved playing with his cars (especially the car modeled like the car his dad drove) and riding Porky, his three-legged pig. He attended school in Blackwell, Oklahoma. While a student, he was a class clown and loved his school friends more than the schoolwork. He was very funny, with the biggest grin and the biggest heart to boot. He made lifelong friendships while attending school, including Max DeBoard and Lloyd “Mouse” DeCamp.

Following school, in 1967, Carl enlisted in the United States Navy. While serving our country selflessly throughout the Vietnam war, he learned how to paint aircraft. After receiving an honorable discharge, he became a contracted professional in the field of aircraft painting. He worked for many famous individuals as well as Million Air and Cessna. His job expertise and highlights could fill a book; he was well known for being “the best”.

After retirement, Carl’s favorite thing to be was a grandpa. He loved spending time with his grandchildren and family. His great joys in life were his two daughters, Kindra and Kara, but his greatest joys were his grandchildren, Kane and Stella. Carl’s grand babies were the apples of his eyes and the dimple in his grin.

Outside of being the wonderful father and grandfather, he enjoyed watching Fox

News, drinking coffee and watching Dallas Cowboys or OU football games. He was an animal lover and was loved by all animals, even if it meant he had to bribe them with treats. He had a few very special pets in his life that he cared very much for. He enjoyed antique stores and loved finding pieces to add to his rather impressive tobacco collection.

Carl was his family’s hero in every sense of the word. He had a heart of gold, wore his heart on his sleeve, and would gladly go to the ends of the earth for the ones he loved. This remarkable man has left a hole in the hearts of his loved ones that will never quite be healed.

Bartlesville, Oklahoma at the age of 74.

His strength and courage through his trails will be forever be admired by his family and friends, as his soul finally rests peacefully. Those left to cherish his memory include his mother, Norma Peres; children, Kindra Peres, Kara Peres; grandchildren, Kane Stanton and Stella Stanton; siblings, Evelyn Hicks, Rita Bruner and Leslie Christenson; as well as his best friend, Max DeBoard.

He was preceded in death and has gone home to be with his father, Oren Peres; siblings, Frank Peres and Mary Garland; and his best friend, Lloyd Decamp.

Funeral services will be held at 2:00 p.m. on Friday, September 30, 2022, in the Roberts and Son Funeral Home Chapel with Pastor Daniel Rickman officiating. Burial with military honors will follow in Blackwell Cemetery. Visitation will take place one hour prior to the service.

Online condolences can be made at www.robertsandsonfh.com