National Newspaper Week, and why small papers matter thanks to YOU. 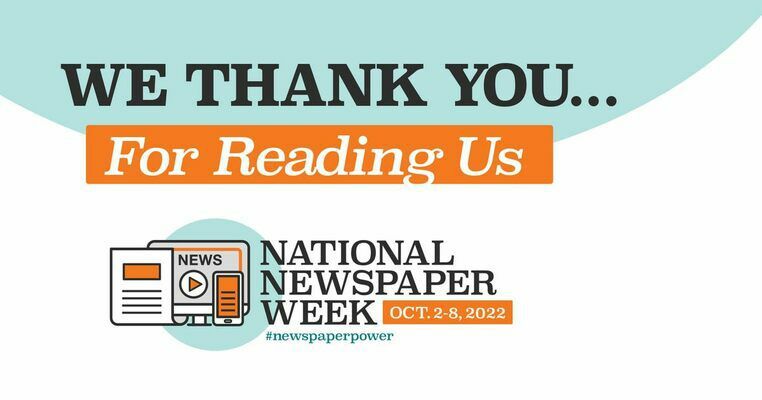 Even when I’m working long hours and feeling the stress of an impending deadline, I love being a newspaperman. It’s the best job in the world because I get to meet people from around the world.

In the last two weeks, I’ve interviewed two people I never thought I’d find myself visiting with. For the Northwestern News, the college newspaper, I had a story about a German professor who came to Alva to research documents maintained by a university history professor.

For The Blackwell Journal-Tribune, I wrote about a South African man who came to work as a farmhand in Kay County for the summer. Now, he’s competing in a high-speed inflatable boat race in shark-infested waters around the southern cape of Africa.

These are just a couple of the neatest stories I’ve been blessed enough to tackle here lately – and they’re just two examples of the kind of stories you can find in your local newspaper.

This is National Newspaper Week, a time when we journalists celebrate America’s most important and long-standing mode of media. But this year’s celebration comes at a turbulent time for the media industry as a whole.

Public trust in newspapers, TV stations and online news outlets is at an all-time low, surveys show. After bitter and divisive political battles and elections in the last few years, accusations of bias have been leveled more and more against some of the nation’s leading news sources.

Without a doubt, some of those accusations are warranted. Some figures in so-called “mainstream media” have abandoned journalistic ethics like objectivity, fairness and balance in favor of shoving propaganda down the throats of consumers, who have increasingly grown tired of being told they’re terrible people for having opinions that don’t align with those of journalists.

At the same time, many of those outlets are unjustly accused of being “fake news” for reporting the truth. Too many people call anything they disagree with or do not like “fake.” To say facts are false just because you don’t like them is dangerous and foolish.

There’s fault on both parts in the debate over problems with modern mass media. But while some major outlets are too busy catering to their consumers and vilifying those who aren’t, where do newspapers like the one you’re reading one fit in?

Small publications like this are not really members of the “mainstream media.” We have a few thousand readers, both online and in print – a drop in the bucket compared to nationwide outlets. And we don’t cover anything like the “big guys” do.

While the nation’s leading news outlets are watching the White House’s every move, we’re shining a light on what’s happening at City Hall. When political activists make angry statements about national problems, we’re writing about an upcoming community fundraiser. And while paparazzi are stalking the mansion of some Hollywood celebrity, we’re talking about the sweet little old lady down the street who is making blankets for children in need.

These are some hypothetical examples, but they’re the kind of stories you can expect your local newspaper to cover thoroughly and passionately. The journalists who write the stories, capture the photos and design the pages of hometown newspapers are as invested in their communities as the people who own businesses, serve on school boards and cheer on the baseball team at a home game. We bring you the news no other outlet does.

Community journalists have no incentive to spread disinformation or incite discord like some on social media and in national media do. Besides, in most small towns, where news spreads like wildfire, there’s no way for journalists to get away with publishing “fake news” without being held to account for it.

That’s not to say we don’t make mistakes. I’ve made my fair share. But we promptly correct them, humbling ourselves before our readers and vowing to do better next time. We admit our wrongs and keep plugging along with the best, most accurate news we can provide because we love what we do: proudly serving our communities and striving to make them better places by bringing people together with valuable, useful information.

Even though we’re not talking as much about major political battles between Republicans and Democrats, we do still tackle tough stories – shocking tales of crime and corruption from the lowest rungs of the societal ladder to the highest branches of local government. Folks don’t always like or agree with what we write about, but that doesn’t keep us from telling the truth. That is, after all, our sole goal.

We’re here because we want our newspapers to help folks. To do that, however, we need your help. Newspapers need revenue from subscribers to survive and keep afloat. Above all, we want folks to read our work. If you don’t regularly read our paper, I’d encourage you to do so. And, if you are one of our loyal readers, I can’t thank you enough for supporting what we do.

Thanks to you, countless journalists like yours truly have the best jobs in the world. And we want to keep serving you.