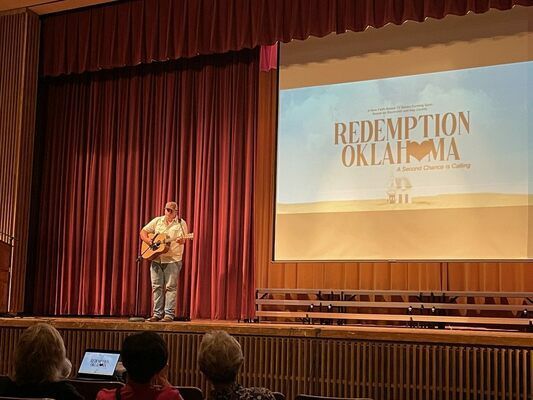 The “stars” were out over Blackwell on Sept. 28 before Homecoming for an exclusive preview of “Redemption, Oklahoma” at the Blackwell High School Auditorium.

The event was hosted by the production company Great Creative Minds Media and featured a Q&A with audience members.

The proof-of-concept screening began at 7 p.m. in the auditorium. Executive Producer Paul Gebhard led the audience in prayer and spoke about the production. Almost 100 people were in attendance.

A proof of concept is, essentially, a loosely connected series of scenes and vignettes that establish the story, characters, setting, writing and tone to be shown to studios and financiers to “sell” a proposed project.

“Our country is hurt. I don’t believe in fighting hate with hate,” Gebhard said. “I believe in love. That’s what it means to be ‘redeemed.’ We all get redeemed. ‘Redemption’ was born from a vision from Blackwell’s own, Tray Goodman.”

Goodman, owner and producer of Great Creative Minds Media, then took the stage.

“We really appreciate the turnout,” Goodman said. “This is 15 minutes. This is everything we shot in July, so this is the whole piece. This will only be shown here, so I am appreciative of everyone that helped with the production. We didn’t have enough time, enough money, or enough crew, but we did it anyway.”

Goodman then brought out local artist Micah Bell, whom he likened to Johnny Cash. Bell is a relative of Goodman and performed the title song for the piece “I Owe It All,” which received rapturous applause.

The footage from “Redemption” was then screened. It began with a young, single mother and her daughter being in a fiery car crash on a dirt road before they found their way into the nearest town of Redemption, Oklahoma, seemingly guided by providence.

They see Bob’s Grill, where locals are sharing stories over coffee and eating. As a couple leaves, they are accosted by a disheveled Pastor Jack, who stumbles in drunk and begins to rave about the Gospel before collapsing to the floor.

Next came a flashback of Pastor Jack in an old country church leading a congregation in song and worship. The flashback scene is accompanied by a vision the pastor has, where he encounters the same mother and daughter from the car wreck by an old well outside the church.

The flashback and dream sequence are shot in an ethereal and dreamlike fashion, almost hauntingly, thanks to director of photography Sam Erdmann. Goodman previously said this was the intent with “Redemption” – to give it a tone similar to other “small town dramas” like Showtime’s “Twin Peaks” or CBS’s “The Twilight Zone.”

Pastor Jack then makes his way to the church from his past. A sweeping aerial shot shows he and the mother and daughter are on a collision course of fate and spirituality, meeting at the church in the country.

The preview was met with a thunderous reaction, and the audience was encouraged to answer a brief survey.

Goodman returned to the stage and said “Redemption” came about prior to the 2020 pandemic. Initially, it was to be a more supernatural series based off the Larkin Hotel titled “Scarie, Oklahoma,” which would capitalize on the run-down and haunted atmosphere of small Oklahoma towns.

He was also inspired by the runaway success of the TV streaming series “The Chosen,” which follows the life of Jesus Christ in a fashion similar to a more family-friendly “Game of Thrones,” with an emphasis on Christ’s life and the political and social turmoil surrounding himself and his disciples.

“We’re going to make money for the community,” Goodman said God told him, “and then people started coming out to join in this. There wasn’t much interest in ‘Scarie,’ but this has had people from all over coming out to help and contribute.”

Gebhard said he wanted to be a vessel, essentially, for a higher power.

Gebhard, whose daughter is in the production, said his daughter was relentlessly bullied and felt awful about herself back in Arizona. It wasn’t until coming to Blackwell – to Redemption, so to speak – that she found acceptance and belonging.

“She wanted to come back with me tonight,” Gebhard said. “It was almost impossible to get her on the plane to leave after we shot this.

“She pleaded to come with me tonight and said ‘Dad, that’s our family.’ You all, here, opened your arms to her. When we got home from the production, my wife noticed her change and said, ‘What happened?’ I said ‘Oklahoma happened.’ God has his heart in Oklahoma.”

Larry Limbaugh, who is opening up a restaurant on Doolin Avenue in the location of the former Stack restaurant, asked about the “climate” of production in Oklahoma as a potential investor.

With lucrative incentives offered to film production in states and areas like Georgia (“The Walking Dead”), New Mexico (The CW’s “Roswell”) and Canada (The CW’s “Riverdale”), Gebhard said Oklahoma gives up to 38% tax credit return on any investment.

“Redemption” is tentatively budgeted at being a $7 million production ($1 million per episode), which means that 38% of that would be coming back off the top.

“We will be putting together investment pools of people who want to contribute to this,” Gebhard said. “You don’t have to be wealthy to support this. We’re all here because we have love. The project will do 120% payback on anything you invest off the top before any profit is paid out. Once 120% comes back, it’s a 50/50 split between producers and investments.”

Gebhard said Stride Bank is helping to facilitate an escrow account for “Redemption.”

“We’ll meet with people in their homes, their churches, in the community,” Gebhard said.

At the end of the event, Gebhard praised Searcy for his commitment and devotion to the role.

“Nick told me that the Lord had prepared him his entire life for this role,” Gebhard said. “He’s agreed to write, direct and bring in talent. He drove here all the way from Nashville to work on this production. What you’ve seen tonight, no one else has seen. There’s momentum here. Hollywood wanted nothing to do with us, and ‘The Chosen’ made millions. Now what does Hollywood want? That production was started with people like you. Now it’s gigantic. Because that’s the Lord we serve.”