Why is everyone so worked up about HOCUS POCUS 2? 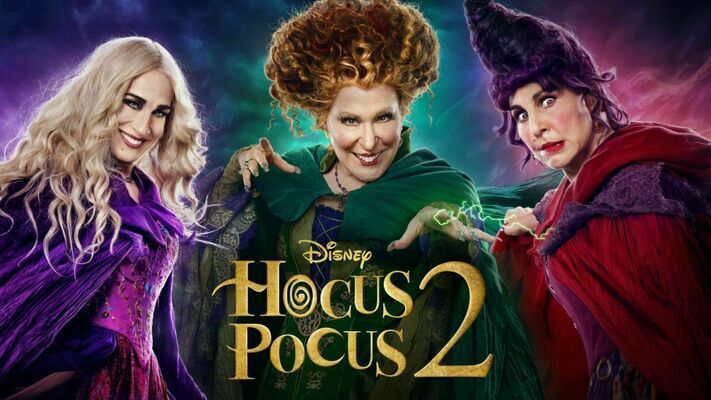 Billy Butcherson (Doug Jones), the undead lover of two of the Sanderson Sisters in Disney’s HOCUS POCUS 2, asks the in-universe Sanderson fan Gilbert (Sam Richardson) after he revives Billy in the Salem cemetery in order to lock the witchy trio away again.

There’s been a lot of conversation around the long-awaited sequel to the 1993 cult classic which debuted on Disney+ this month. Most of it was was good and inoffensive. Some of it claimed the film had the ability to send demons into peoples’ homes. Some of it was bad. But why?

There seems to be some misconception around Disney’s original “Hocus Pocus” which is tied to the nostalgic memories of many who watched it as children and now many, with children of their own, have taken to Facebook and other social media platforms to voice their discontent.

Noted film critic Gene Siskel remarked in the 90’s that the original film was a “dreadful witches comedy” with the only redeeming factor being Bette Middler’s musical performance. Roger Ebert gave it one out of four stars and called it a “confusing cauldron” of shrieking and noise. The Miami Herald said the film was not a “must-see” of the summer, and that it was a “lackluster affair” and so on.

The film released in the summer of 1993 and was a box-office bomb for Disney, losing the company almost $16 million dollars. Since then, of course, ABC Family and other networks have given the film new life through seasonal viewings around Halloween, turning it into a beloved holiday favorite that has spawned merchandise, memes, holiday décor, recipes, and might give audiences the misconception that it is – or was – some huge, successful, event. It is now, but that doesn’t retroactively mean it always was.

HOCUS POCUS was never “good”. It was “good” because you were a child.

My friend and I love the pulpy 1996 Billy Zane adventure movie THE PHANTOM. I love WILD WILD WEST. Does my love for them mean they didn’t receive a lashing from critics and a scorching reaction from audiences? No.

Technically, HOCUS POCUS didn’t become a hit for Disney until the film was re-released in theaters during the pandemic.

Anyway, Disney saw what Disney sees: money. The Mouse is a powerhouse that feeds on the life essence of nostalgia much as Hocus Pocus’s Sandersons feed on children to stay young.

So now that brings us 20 years later to 2022 where HOCUS POCUS 2 has released on Disney+.

The sequel, directed by Anne Fletcher (2009’s THE PROPOSAL and “This Is Us”) is a whimsical musical-comedy that mostly acts as an hour-and-a-half showcase for the franchise trio of Bette Middler, Kathy Najimi, and Sarah Jessica Parker to have some fun singing and dancing in costume.

The “story”, if you could call what holds this film together a story, follows teen besties Becca and Izzy in modern day Salem who accidentally free The Sanderson Sisters from their imprisonment. Once free, they set their sights on killing the descendant of the village proctor who ripped them from their homes as children in the 1600’s.

HOCUS POCUS 2 has a heavy emphasis on nostalgia and basically is glorified background noise for Halloween parties to keep on for children to watch between their handfulls of candy and turns watching YouTube on their phones.

The 1600’s flashback features a welcome appearance by “Ted Lasso” and “Game of Thrones” star Hannah Waddingham who relishes her screen time as the Mother Witch, playing off of the talented little girls playing younger versions of The Sanderson Sisters.

The Sandersons are reintroduced into the world via a hilarious play on Elton John’s “The Bitch is Back”, redone here as “The Witches Are Back”. You can tell that Middler, Parker, and Najimi are having the time of their lives and without their obvious enthusiasm for the roles (to which they slip back into effortlessly) this film would come off as a ghastly reanimated corpse instead of a somewhat harmless specter.

Another foot-tapping moment is a brilliant version of Blondie’s “One Way Or Another” with a city-wide dance number that is absoutely delightful and fun, and perhaps surprisingly the most “Disney” thing the Mouse House has done in the last five or six years, cinematically speaking.

HOCUS POCUS 2 is peppered with winks and nods to the original film of course, and has some fun performances by two alumnus of HBO’s stellar comedy series “Veep” with Tony Hale as the Salem Mayor (and object of The Sanderson’s scorn) as well as the aforementioned Sam Richardson as the occult maestro Gilbert.

Doug Jones, who reprises his role from the original film as Billy Butcherson, also seems to be having a fantastic time. A creature-feature legend, Jones went on from the original 1993 film to play Abe Sapien in Guillermo Del Toro’s “Hellboy” series as well as the fishman in Del Toro’s Oscar-winning 2017 film THE SHAPE OF WATER.

The film, playing on the strength of the main trio, even has a surprisingly...poignant?...ending scene and resolution with The Sandersons that made me feel a type of way that a Disney movie hasn’t touched on since 2014’s devestating SAVING MR. BANKS.

To say HOCUS POCUS 2 is a blasphemous ruination of your childhood is a silly thing. The same way I caught myself dissatisfied with last year’s SPACE JAM: A NEW LEGACY. While HOCUS POCUS 2 is far more competent of a film than SPACE JAM 2, the point still stands. They are silly films for children.

Can there be brilliant children movies? Yes. Does a movie being made for children mean it can’t inherently be good, artful, and well thought out? No. Look at Studio Ghibli’s filmography. Look at Sony’s “Spider-Man: Into The Spider-Verse”. Look at some of Pixar’s older work, look at Disney’s classics like “Hercules” and “Treasure Planet”.

But to act like the original HOCUS POCUS is some momentous work of pristine cinematic art and that HOCUS POCUS 2 is this affront to the senses is ridiculous.

It, like the original, is a competent and fun family movie made to be watched, digested, and forgotten about, to be replayed every October with a drink and some candy while you’re decorating the living room. I highly doubt your parents watched the original with you and went “that movie changed my life”. So don’t ruin the fun for your kids, just like your parents didn’t ruin the fun for you.