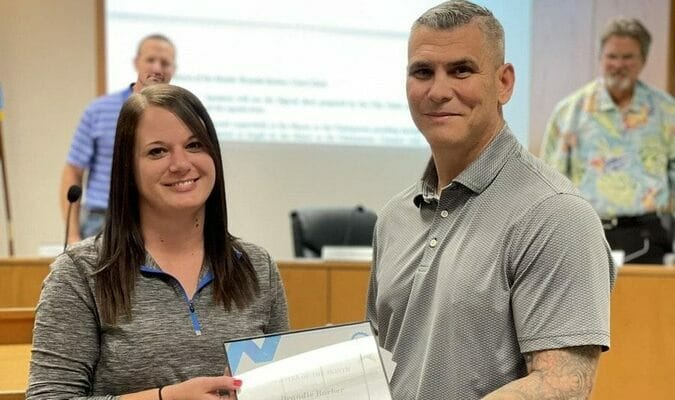 The Blackwell City Council met Thursday night to honor Brandie Barker as the Employee of the Month and to receive an update on the city’s proposed water treatment plant. Barker, the City of Blackwell’s court clerk, was praised for her work with the Blackwell Police Department dispatch center.

The library and police department hosted a story time event for children. The library also hosted a movie day. Workers cleaned out the library’s front garden for Homecoming and hosted a dog prom, which raised more than $100 for the Blackwell Animal Shelter.

Blackwell Public Power Manager Greg Sixkiller reported that there were no electrical issues at the fair. He said the upgrade to the power lines was worth it. Fifty-two lights were changed out at the Blackwell Youth Center, meaning all the lights there are now LEDs. Sixkiller and his men worked on Morgan Field for last weekend’s Top of OK Jam concert. Sixkiller also reported that the electric department is still trimming trees around power lines as a precaution for the winter.

Wieland addressed the Council with his report. He said he had been in contact with the Kay County Fair Board, which reported that September’s fair had an estimated turnout of 30,000 to 40,000 people. He called it a huge success for Blackwell. Wieland praised city employees and citizens as well, saying everyone in the community went above and beyond for the fair, Homecoming and other events through the month.

Moving on, the City Council voted to surplus some furniture from the library. Next, the Council approved the appointment of Pat Hullet to the Blackwell Economic Development Authority.

The Council then voted to declare Oct. 31 as Trickor-Treat Night within the City of Blackwell between 6 p.m. and 8 p.m.

For the first time in several years, the announcement lacked the Council’s traditional “spirited” Halloween declaration.

Moving onto the agenda for the Blackwell Municipal Authority, Council members heard from Parkhill Engineering in regards to the pilot program for the city’s planned water plant.

Representatives from Parkhill informed the Council that, in their study for the plant, they found the presence of radium in the raw surface water before treatment.

They explained that radium has certain limits set by the Environmental Protection Agency.

Certain technology is capable of handling the removal of radium from water, which was not in the original plan for the new plant. Parkhill proposed a new pilot study to see if the radium presence could be treated by a new state-of-the-art system. The representatives said Blackwell’s radium presence is so infrequent that it was not originally part of their testing process.

They stated that, on average, Blackwell was below the primary standard for the presence of radium.

Radium naturally occurs in surface water and can vary depending on local geology, according to scientifically backed statements from various state departments in Illinois, Maryland, Connecticut and Minnesota in regards to their drinkingwater.

The current lime treatment plant within the City of Blackwell already treats for radium.

Following the meeting, Wieland said the city’s goalis to proceed in getting the best and most effective water treatment plant available. The meeting ended shortly after 7:30 p.m. Parkhill officials are expected to attend a future meeting to further discuss the plant.