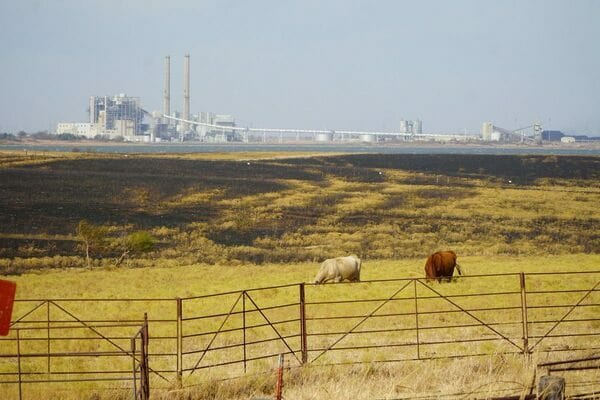 If smoke got in your eyes during the weekend, you weren’t alone. Wildfires burned across northern Oklahoma on Saturday and Sunday, and multiple fire depart-ments from across the region worked through the day and night to extinguish the drought- and wind-fueled infernos.

On Saturday, smoke from a wildfire in Pawnee and Noble counties about 50 miles southeast of Blackwell traveled across Kay County and as far north as Hutchinson, Kansas. The blaze burned roughly 3,000 acres, according to Noble County Emergency Management Director Jimmy Smith.

The fire likely began when a piece of farm machinery caught on fire in Pawnee County, setting a hay field ablaze, Smith said. High winds from the southeast pushed flames toward Sooner Lake north of Highway 15, which was closed Saturday night. The lake served as a barrier that helped firefighters stop the blaze south of OG&E’s Red Rock electrical generation facility, Smith said.

Most of the land burned was native grass, brush and pasture. No residential structures were damaged, though fire came within mere feet of at least one a few miles north of Highway 15. About 14 fire departments responded, including the Blackwell, Kildare, Newkirk and Tonkawa fire departments in Kay County.

Blackwell Fire Chief Cory Hanebrink was in charge of the Kay County Task Force detachment. The only injury stemming from the blaze was a firefighter who was treated for smoke inhalation at a local hospital and released in good condition.

The smoke from the fire was thick over Blackwell on Saturday night, prompting firefighters to drive around town in search of any potential blazes in town, none of which were found. On Sunday, ranchers moved cattle out of burned up pastures, while utility workers repaired damaged electrical lines and utility poles.

His property wasn’t damaged in the fire, though the inferno came within a short distance of his home.

“Especially in rural Oklahoma, everybody is there to help, wherever they can help, as fast as they can help,” Casey said. “With everything going on in the world, I don’t know why we always complain because when it really gets rough, people are there, always.”

GRANT, ALFALFA COUNTIES BATTLE BLAZE As firefighters on Sunday kept an eye on the smoldering ashes left behind by the Noble County fire, some of the same fire departments geared up and trekked west that afternoon to help extinguish a wildfire in Grant and Alfalfa counties, about 45 miles west of Blackwell on State Highway 11.

The highway was closed near the Salt Plains National Wildlife Refuge for hours as a mile-wide fire burned through brush, trees and forest land between Medford and Cherokee. Dozens of fire departments from north-central and northwest Oklahoma responded, including firefighters from Blackwell, Braman, Kildare and River Road in Kay County.

High winds and dry conditions once again posed challenges to firefighters as they dumped thousands of gallons of water on burning trees and grass, Harris said. Crews used bulldozers to help control burning brush. The region’s sandy terrain and roadways caused at least one fire truck to get stuck.

“It’s been almost 36 years since I started fighting fires,” Harris said. “This was the first time I experienced [the sandy terrain], and it was horrible. It’s dry, and I’m having to put it in four-wheel-drive. “It’s like going to the beach or Little Sahara. … I’ve still got sand in my eyes,” Harris said Monday morning.

He estimates that Sunday’s fire in Grant County was nearly as large as Saturday’s in Noble County. He said he was unaware of whether any structures were damaged, as little official data on the fire had been released by Monday morning.

The Journal-Tribune’s calls to the Grant County Sheriff’s Office on Sunday and Monday were not returned as of press time.

Grant County farmer and rancher Kevin George said the blaze came within a half-mile of his home Sunday. As a precaution, he used a brush hog to knock down tall grass around his property to help keep flames from shooting high.

“We were fortunate enough that the wind was in the right direction, so we didn’t get a lot of smoke smell,” George said.

“We could watch it a half-mile west. I would say those flames, when they hit those cedars, were going 30 or 40 feet in the air, at least.” Crews were released late Sunday evening.

“Everybody worked really well together,” Harris said. “It shows the need to be able to go help other countries.”

The fires were the latest and largest in a rash of fires across rural Oklahoma, which has been beleaguered by Dust Bowllike drought conditions for several months. This year, Oklahoma has experienced some of the worst drought conditions since 1936, according to the Oklahoma Mesonet.