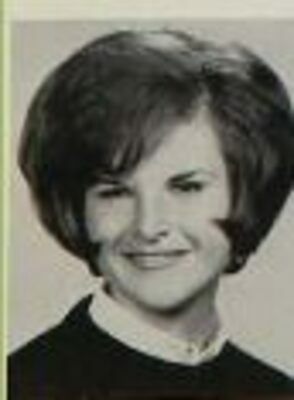 Toni Jo Baker Hatton On June 9, 2022, after a long battle with Alzheimer’s/Parkinson’s, Toni peacefully went to be with her Lord at her home in Milton, FL. She was 73.

Toni was born in Blackwell, Oklahoma, on October 2, 1948, to Calvis Harvey Baker and Margaret Helen Gillespie Baker. Attending Blackwell Public Schools, she was a member of the large Future Homemakers of America group all 3 years of High School, was Vice President her Junior year and President during her Senior year. She also participated in the Junior Play, “The Thread That Runs So True,” and was a member of Y-Teen, Pep Club and Chorus all three years of High School, graduating in May of 1966.

After High School, life took Toni to Florida where she worked for many years for Russell Athletics of Milton, FL, and then for Johnson Communications of Pensacola and was a highly valued employee wherever she worked. She was an avid genealogist and spent many years traveling to various states searching through records researching our family back in the days before the internet existed and genealogy research was done the hard old-fashioned way.

She was President of the Santa Rosa Florida County Genealogy Society in the 1990’s and was active in the donation of census records and other key genealogical records to the Milton, FL Library. Surviving Toni are two sons, James Michael Rouse of Mobile, AL and Calvis Eugene Brahier and grandchildren, Dakota, Wyatt and Shyanne Brahier of Milton, FL; her cherished cousins, Mike and Sandy Hatton, of Bay City, TX; and close friends, Jerome Manning and Robin Nobles of Milton.

She was preceded in death by her beloved husband, Kenneth Howard Hatton, of Van Vleck, TX, daughter, Michelle Ann Odom, and her Mother and Father, Calvis and Margaret Baker. Toni is also survived by; her brother, Bill Baker, and wife Susie of Norman, OK. She was loved by her nephews and nieces, Bill’s son Michael Gene Baker and wife Shanda of Robinson, TX, Bill’s daughter Sidna Virginia Trimmell and husband Kevin of Blanchard, OK and Bill’s daughter-in-law Gwendolyn Meister Baker of Owasso, OK; and many great nephews and nieces as well as many great-great nephews and nieces.

Preceding her in death was Bill’s oldest son, Marcus Wayne Baker. Toni’s sister, Barbie Heinen and husband John of Oklahoma City, OK, their son, Mark Lee Heinen, of Newalla, OK, their daughter, Tara Lynne Johnson Reed and husband, David, and children, Dylan Ray Johnson, Gabrielle Love Reed and Georganna Paislee Reed also survive her. She enjoyed cooking, relaxing beside the Koi Ponds her son, Cal, built for her, playing with her grandchildren, and long talks on the phone with her sister, Barbie, and her cousins Mike and Sandy. Her Grandparents, Walter Burlin Baker and Essie Pearl Brown Baker; Edward A. Gillespie, Sr. and Step Grandmother, Bessie Gillespie all of Blackwell; and Step-Grandfather, Hiram Thomas Crider and Grandmother, Minnie May Durham Crider of Eureka Springs, AR all preceded Toni in death as did her uncle and aunt, Edward A. Gillespie, Jr. and wife Loretta of Houston, TX; her aunt and uncle, Erma Faye (Faye) Baker Moore and Charles Moore, of Blackwell, and uncle, Jack Baker, of Brunswick, Georgia. Her aunt and uncle, Echo Geraldine Baker Cooper and Homer Cooper of Blackwell, OK also preceded Toni in death. Surviving her is their daughter, Jackie Cooper Davis of Shawnee, OK and their granddaughter Mistie Davis and husband, Frapp of Austin, TX; and their daughter, Linda Cooper Astle, her husband Jon, and their daughters, Shelley, of Phoenix, AZ, and Holly and Romley of Scottsdale, AZ and their families.

No services are planned at this time. A private family interment for Toni will follow at a later time.