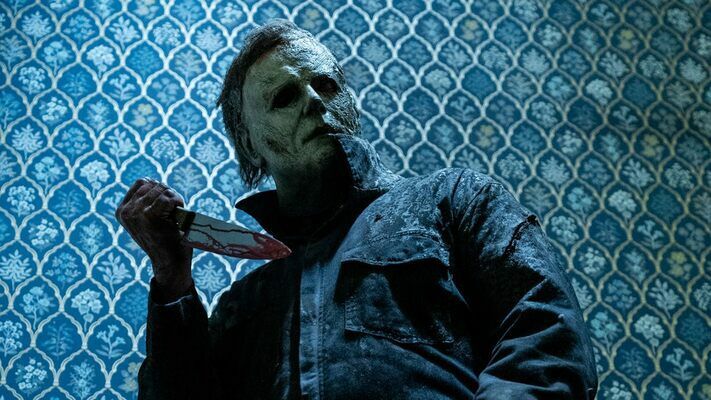 “Am I in control, or do the elements control me? Life or death. Suicide or cherry blossoms.”

HALLOWEEN ENDS, the finale of David Gordon Green’s relaunched Halloween trilogy that began in 2018 as a direct sequel to the 1978 original John Carpenter HALLOWEEN film, released in theaters and streaming on Universal’s Peacock app this past month and has been met with the same divisive reviews that have plagued Green’s trilogy since the 2018 start.

Those going in to see Michael Myers’ latest killing rampage might go home disappointed when they find out that HALLOWEEN ENDS is a neon-drenched love story about change and the nature of evil instead of a “babysitters-by-the-minute” slasher of old.

And, I might add, it is a much better film for it.

After a prank by boy goes horribly wrong and he falls from the stairs, breaking his spine, Corey is blamed by the parents and turned into a pariah and dashing his hopes and dreams of a normal life despite being cleared of any wrong-doing.

Laurie, still reeling from the death of her daughter and son-in-law from HALLOWEEN KILLS at the hands of Myers, is attempting to write a book about her life, dealing with the town blaming her for Michael’s rampage, and her budding romance with Deputy Hawkins (a loveable Will Patton).

Laurie has learned to live with the fact Michael seemed to have escaped once and for all, and with no sign of him in 4 years thinks it is time to move on.

However, at a Halloween party at a local bar, Corey is accosted by the mother of the child he was babysitting. Running away from the party and from Allyson, Corey is once again assaulted by a group of teens who chase him into a sewer system where he comes face-to-mask with a reclusive Michael.

Enraged by how he is treated by the townspeople, his mother, and feeding off of Allyson’s own desire to “burn” Haddonfield to the ground and leave, Corey is “adopted” by a weathered and beaten Michael and lures Allyson’s belligerent ex-boyfriend into the sewers, marking the start of Corey’s metamorphosis, his partnership with Michael, and setting them all on a collision course of finality towards the one woman who started it all: Laurie.

ENDS is a film about reconciling with the past, and what your circumstances turn you into.

In the 2018 HALLOWEEN, Laurie is an alcoholic recluse who lives armed to the teeth in a fortress home, ready for the day Michael Myers returns to finish what he started in 1978. She has pushed away her family and lives a life of isolation, anger, and misery.

In the sequel, HALLOWEEN KILLS, Laurie warns that Michael is not “flesh and blood” but evil transcended. That he curses and infects people, places, with his horror.

In HALLOWEEN ENDS, Laurie is somewhat back to living a normal life, but she is reminded constantly of what “she caused”, inadvertently, but simply just surviving the initial 1978 babysitter killings. Outside a grocery store, she is approached by the daughter of a woman whose throat was slit and husband was killed in HALLOWEEN KILLS, and has a breakdown in her car.

Michael is a curse, a sickness of evil, and Laurie’s greatest sin was surviving. We have obviously dealt with her survivor’s guilt in the 2018 film and HALLOWEEN KILLS, but now we deal with her granddaughter Allyson and the controversial character of Corey, who is the opposite of Laurie.

Whereas Laurie pulled herself out of the darkness of Michael, Corey let himself succumb to it, be infected and driven mad by it.

Corey is the main character, essentially, which is a bold move given that this is the “finale” of the Laurie Strode story of 30 years.

We are drawn into Corey’s romance with Allyson, shot much like an indie film fever dream. Synth music bumping over night-time motorcycle rides, rooftop talks against neon signs. The chemistry between Campbell’s Corey and Matichak’s Allyson is heart-warming, but overshadowed by the dread of what is happening to him.

The final confrontation between Michael and Laurie, which of course everyone wants to see, is actually made better thanks to the time spent with Corey and Allyson, and the drama between Allyson and grandma Laurie.

For the slash fanatics, ENDS isn’t completely devoid of bloodshed. There’s a fantastically nasty slaughter at a junkyard, and more disgusting kills as Corey and Michael go on their rampage.

And, of course, the Laurie and Michael showdown is well worth the wait. It is emotional, intense, and very much “final”. While the outcome is predictable, the feeling of accomplishment and worth on behalf of the victor feels very deserved given everything.

HALLOWEEN ENDS is now streaming on Peacock and still playing in theaters.