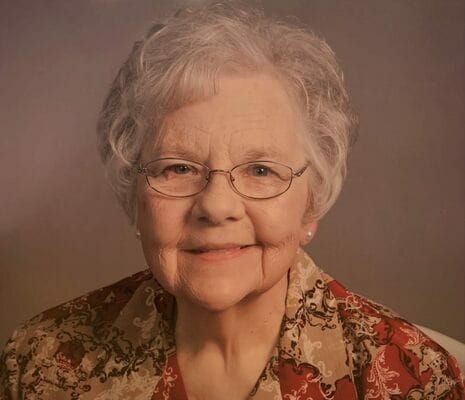 Carol Ann Meador of Blackwell, OK went home to be with Jesus on Saturday, November 12th, 2022 at the age of 82.

Carol Ann (Maltby) Meador was born to Norman and Doris Maltby on September 9th, 1940 in Wichita, KS. As a student she worked at Innes Department Store as a gift wrapper, and later graduated from West High School.
Carol married Mark Richard Meador, Sr. on May 9th, 1958 in her parent’s home. While living in Wichita, they welcomed three children: Sheryl, LaDonna and Mark. In June of 1970, they moved their family to Blackwell, OK so that Mark Sr. could pastor at Grace Baptist Church. For many years Carol was a homemaker. She loved to bake and was a seamstress, who sewed everything from prom dresses to Barbie clothes for not only her daughters, but her sisters as well. As her kids grew, Carol worked part-time for TG&Y, and later in the cafeteria at both BHS and Parkside School. After her children were grown and had homes of their own, Carol enjoyed spending her time helping at her church with dinners, Awana, and even travelling to Falls Creek on a couple of occasions with her son to cook for the youth. She enjoyed her friendships at T.O.P.S., and loved the ladies from her Sunday school class. Carol loved being a grandma and great grandma and while she was not personally on social media, she loved having her picture posted on ‘The Facebook’ with them. In later life Carol was blessed with a special companion, Carl Thompson, with whom for many years she shared meals, family gatherings and Wheel of Fortune.
Carol is survived by her three children, Sheryl Smith of Collinsville, LaDonna Crampton and husband, Vance, of Edmond, and Mark Meador and wife, Lori, of Blackwell; 8 grandchildren: Justin and his wife, Elyse, Heather and her husband, Dave, Breanna and her husband, Dillon, Kaylee, Kale and his wife, Ashlee, Marlee, and her husband, Joseph, Megan, and Michael and his wife, Ruth; four great-grandchildren: Sadie, Haven, Caydence, and Ozzy; her sisters, and brothers-in-law, Norma and Terry, Peggy and Victor, and Teri and Charlie; her sister-in-law, Wanda, and her special friend, Carl. She was preceded in death by her parents, her brothers Jack and Jerry, her husband of 36 years, Mark, and three grandchildren, Lance, Leah and Minden.
Viewing will take place on Sunday, November 20th from 2 p.m. to 7 p.m. at Roberts and Son Funeral Home.
Services are scheduled for 10:30 a.m., Monday, November 21st at Immanuel Baptist Church with Mark Meador, Jr. officiating. Burial will follow at the Blackwell Cemetery.

Casketbearers will be Justin Smith, Kevin Foust, Kale Crampton, Michael Meador, Joseph Brown and Dillon Ker.
Memorial contributions may be made to the Blackwell Public School Foundation, sent in c/o Roberts and Son Funeral Home, 120 W. Padon, Blackwell, Oklahoma 74631.
On-line condolences can be made at www.robertsandsonfh.com