After 30 years, this historic Deer Creek shop is back open for business 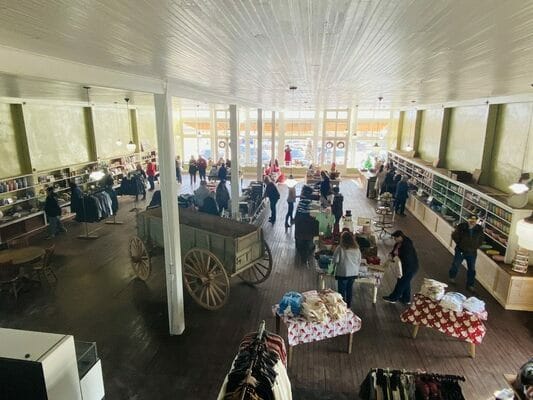 Brittany Webster hates to see an old building fall down – especially when she’s inside it.

The Deer Creek native and her father came closer than they thought to being covered in rubble and debris the day they stood in the basement, shoring up the south wall of the old Deer Creek Mercantile.

“We were just scared to death the whole thing was going to fall in,” Webster said. “It was making a lot of noise when we were down there working, but thankfully nothing bad happened.”

The wall stood the test of time, just like Webster’s vision for the store. The mercantile, one of the last businesses in Deer Creek and one of the most historic businesses in Grant County, closed in 1994 after nearly 100 years of operations. But on Saturday, for the first time in almost three decades, customers walked through the front doors once again.

Webster, a 27-year-old entrepreneur, has restored and reopened the town’s former general store with selections of clothing, home décor and more inspired by her dream of keeping her hometown alive.

“We’re just happy to see it go again,” she said.

Customers outnumbered town residents on Saturday and Sunday for the Deer Creek Mercantile’s grand reopening, which drew visitors from as far as New York and California with ties to the tiny town and the store at 1183 Main St.

More than 300 people walked through the vintage wooden doors, browsing aisles of men’s and women’s clothing, children’s toys, kitchenware and groceries. About 40 cars at a time lined Main Street in Deer Creek, a town of fewer than 70 residents about 14 miles west of Blackwell.

“It was the busiest that Deer Creek has been in a long, long time, over 25 years,” said Jacob Webster, Brittany’s brother. “There haven’t been that many on Main Street.

“It was exciting to see the town busy again.”

Bringing that dream to life came thanks to nearly two years’ worth of work to restore the building from floor to ceiling – literally.

The 6,000-square-foot store, built in 1905, replaced two previous wood-frame buildings. And in the almost 90 years it served Deer Creek residents, it saw its fair share of customers – and wear and tear.

When Webster bought the building in January 2021, stuff wasn’t where it should have been. Parts of the ceiling were on the floor, parts of the floor were closer to the basement and parts of the walls were on the ground. The brick mortar joints were decayed to the point that people could pull bricks from the walls.

“It was in really, really sad shape,” Jacob Webster said. “Almost everything in the building had to be touched.”

Brittany, her father and other family members worked from sunup to sundown for months. They restructured the walls, rebuilt vintage wooden shelves, replastered walls and rewired the building, among countless other repairs. They kept as many original components – including lights, shelves, and sections of floor – as possible. To replace damaged floor sections, Brittany tracked down identical wood flooring in North Carolina and Tennessee and drove there with a trailer to pick it up so she could preserve the store’s authentic appearance.

“It should stand another 100 years, at least,” Jacob Webster said.

The mercantile building is the oldest commercial building in Grant County and is listed on the National Register of Historic Places. From 1908 on, it was owned and operated by the family of Reuben Lehman, a Russian-German Mennonite.

Lehman was known for paying more for farmers’ goods than other merchants in the area, according to the building’s National Register nomination document from 1984. It carried a variety of food for years, and it also had some goods that caused controversy.

“Chewing tobacco and playing cards were also sold until an itinerant minister convinced Lehman that they were harmful to the moral standing of the local populace,” according to the nomination form. “Lehman immediately had all questionable merchandise taken to a side alley and burned.”

His son James later ran the store. The family’s Russian-German Mennonite heritage meant the mercantile was “the only remaining example of an ethnic-owned business which has retained its original function in north central Oklahoma” as of 1984, according to the nomination form.

Webster bought the building from the Lehman family.

The mercantile’s grand reopening in its original location on Saturday was the biggest step in Webster’s plan to revitalize the store and her hometown. But it all started in 2018, when she opened the store in the town’s former post office across the street. It served as the store’s temporary home for a while.

Webster said her motivation to reopen the store was fueled by the past and passion. She grew up hearing about the original mercantile from her family and others in the area.

“I’d always wanted to open a store, and I wanted to see Deer Creek come back to life,” Webster said. “I wanted the mercantile to live on even if it wasn’t in that same spot. Then we were lucky enough to be able to buy the building from the owner’s family. I was happy we got it back open again.”

She has plans to offer additional goods in the future. For now, though, she said she’s excited to have the store reopened for past and future customers to reminisce and make new memories.

“Many times we wondered why we did it,” she said. “But it was all worth it in the end.”