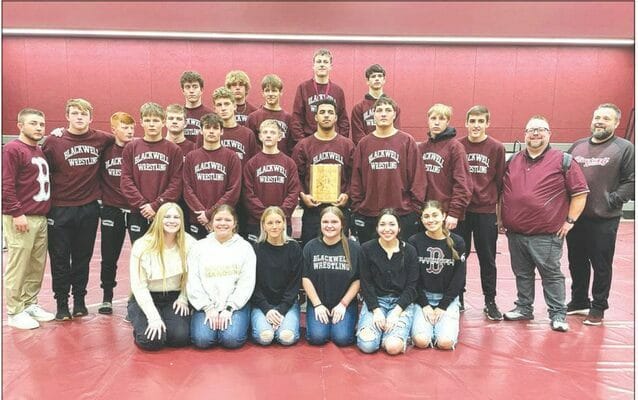 The Blackwell High wrestlers had a great week on the mats. The Maroons started the week with a dual match in Ponca City on Tuesday 12/06/2022. The Maroons dominated the Wildcats, winning the match 48-24.

The in-county rivalry got heated at times.

On Wednesday multiple Facebook posts reported, and sources confirmed that Ponca City Wrestling coach Justin Rolland was suspended for conduct at the match, and a student walkout was planned in protest.

By Wednesday evening, multiple sources were reporting that Rolland had been reinstated.

Ponca City Athletic Director Justin Leavitt was reached by telephone and stated he had no comment on the situation as it was a personnel matter.

The Blackwell Maroons are the 2022 winners of the Perry Tournament of Champions with 218.5 points besting a field of 17 teams.

The Maroons edged out Yukon by 18.5 points for the title. Class 6A schools from Westmoore, Ponca City, Catoosa, and Choctaw rounded out the top five team finishers.

In the championship match Goff would go the distance in winning a 9-1 major decision over Alex Wilson (Yukon).

The Maroons got second place finishes from Jaxson Brown (106 pounds), Louden Wolfe (113 pounds), Kaiden Ailey (126 pounds), and Kaisen O’Dell (138 pounds) for much needed points. Brown went 3-1 on the weekend with two falls before falling to Eric Casula (Westmoore) on a 15-0 tech fall at the 4:42 mark.

Wolfe won his first two matches by falls in 2:00 and 33-seconds before falling to Kay County rival Chris Kiser of Ponca City on a 9-0 major decision in the finals. Ailey would improve to 5-1 on the year with his second-place finish, going 3-1 in the tournament.

Ailey started his tournament with a 16-1 tech fall over Talen Daily (Arkansas City) in 4:14. Ailey would win two close decisions to get into the finals, were Deer Creek’s Garon Kaiser pinned Ailey at 3:14. O`Dell went 4-1 in Perry, with two falls and two decision wins.

Jake Miller won third place the hard way this weekend losing early in the tournament and ten winning six matches in a row to finish the weekend 6-1. Miller lost to Corbin Zugelder (Catoosa) in a tight 10-8 decision before winning his final six matches.

Miller won by major decision over Hayden Cromwell (Yukon) 14-6 for the third place finish. Lawson Lusk (165 pounds) went 3-2 on the weekend for a fourth place finish.

Lusk would win his first two matches by falls to get to the semi-finals against Wyatt Bahm (Arkansas City) were Lusk dropped a 13-2 major decision. Lusk would rebound in the consolation round for a win before getting pinned by Caleb Spencer (Catoosa) in the third place match in 1:36.

Kolby Looper (215 pounds) would also finish in fourth place going 3-2 on the weekend. Looper started with a pair of decisions to get to the semi-finals until Gabriel Roland (Ponca City Senior) pinned Looper in 1:06 to force Looper into the consolation brackets.

Murphy won his first two matches by a fall and a decision but then ran into Ponca City’s Cameron Kiser in the semifinals. Kiser would pin Murphy in 2:41. Murphy would then drop his first consolation match on a 9-2 decision before rebounding to pin Joseph Vallejo (Yukon) at the 1:20 mark for fifth place. Payton Head (132 pounds), Jake Derozier (138 pounds), and Johnathan Stasyszen (157 pounds) went 0-2 on the weekend and did not place.

The Maroons will travel to Kansas City for the KC Stampede Invitational Tournament this weekend.