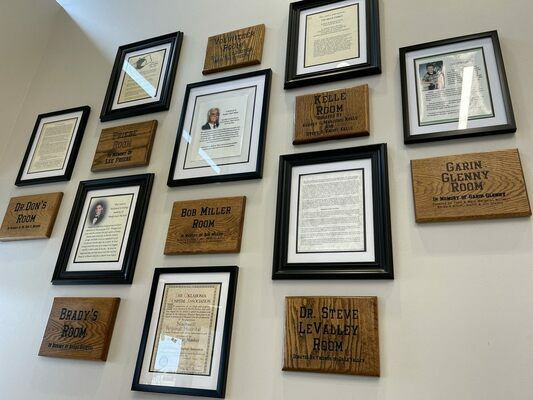 Stillwater Medical Center – Blackwell is honoring the hospital’s storied past as it continues to move into the future with a newly added memorabilia wall in the hospital’s lobby. The wall contains original plaques for the former Blackwell Regional Hospital’s dedicated rooms as well as historical passages that accompany them.

“The Blackwell hospital has meant a lot of things to a lot of people in our community,” said Danen Everly, Stillwater Medical-Blackwell’s executive assistant and medical staff coordinator.

“Some have experienced happiness. Some have experienced sadness. Many of our community members were even born at the hospital. I know through the process of the remodel and the rebuilding that the community was saddened to see bits of our history turn to rubble. We wanted to try and keep some of the history of the old hospital as we built the new one.”

In the early 2000s, the Blackwell Hospital Foundation began working with several families in the community and dedicated nine inpatient rooms in honor of late family members.

“This was a hugely sentimental project for the families, and we wanted to incorporate the memories of those rooms into the new hospital,” Everly said.

“Thus, the idea of the memorabilia wall was created. We would not be where we are today without the support of our community, so we wanted to do what we could to show them just how much we appreciate them. “The volunteers also created the brick memorial path that was located outside the emergency room / outpatient entrance. We, too, wanted to keep that project and have relocated that to the flagpole on the west side of the building. The helipad dedication monument was also preserved and relocated to the new helipad area.”

Last month, Stillwater Medical-Blackwell held a ribbon cutting for the newly finished hospital. Work began on the site in 2020.