Bearsun passes through on cross-country walk for mental health awareness 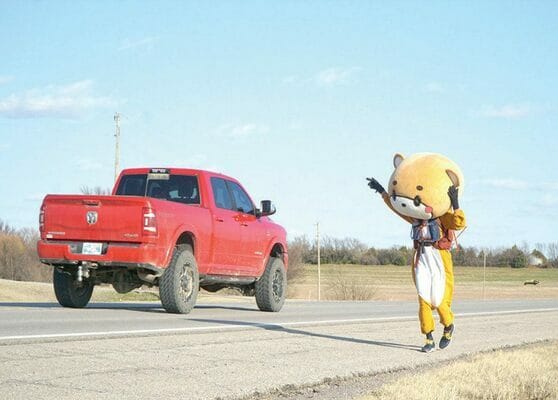 Drivers along State Highway 11 had the chance to bear witness to an uncommon but not-so-unfamiliar sight Thursday: a man in a bear-y recognizable costume was running west through Blackwell.

For the second time since 2021, bear suit-donning man Jesse Larios – better known as“Bearsun” – traveled through town on a mission to raise awareness for mental and physical health issues.

On Thursday, he faced unbearable cold and winds he ran, pawed, and clawed his way back west.

“It’s been 38 days now,” he said. “I’m trekking 37 miles per day. I plan on picking it up, though.” In almost every place he’s traveled through, Larios has been more than the average bear. He has drawn widespread media and community attention, helping bolster his cause.

“I’m trying to talk about subjects like mental health, cancer and autism – anything that plagues humanity,” he said.

“Mental health is probably the main one.” Larios was like a bear in the air Thursday as he battled Oklahoma winds, which he said were “beyond bearable.”

His oversized bear head-shaped hat made him an easy target for the stout Oklahoma breeze as it swept across the plains, threatening to blow him down as he jogged along the eastbound shoulder of State Highway 11.

The gusts from passing cars and semis added to the difficulty. Still, he grinned and beared with the task at hand – or paw.

Larios encourages people to bear in mind that running coast to coast is physically and mentally taxing.

He said he hopes people can relate to the struggle and empathize with those who have daily physical or mental health struggles. As his character’s name implies, he hopes to shine a light on the issues.

“It’s not just talking about it, but also putting a visual aspect to it,” he said of the need for his garb. “People want to see stuff. They’re tired of talking. … I used my artistic skills. I created the character.”

The journey has helped Larios better connect with people, he said. “I just see more potential with our future – our past generation, our current generation, and the future generation,” he said.

“It gives you hope.” The halfway point of Larios coast-to-coast trek was east of Blackwell, he said, meaning he’s got more than half of the metaphorical bear by the tail. His backpack, filled with only the bare necessities, sustains him between stops. He keeps followers updated on his social media pages, “I amBearsun.”

As of Monday, he was almost halfway through the Oklahoma Panhandle. Larios expects to arrive on the west coast sometime in January, so several more weeks will pass before he can go into hibernation.

He said this journey will be his last time running coast-to coast. But he said he hopes people will always remember to pursue growth in their lives – so they can bear fruit.

“Everybody can contribute by helping themselves grow with the things they love in life,” he said. “That’s the best way you can help out. You don’t have to be an Elon Musk or a Bill Gates or a freakin’ Brad Pitt, you know. Grow with yourself, enjoy life, and people pick up on that.”