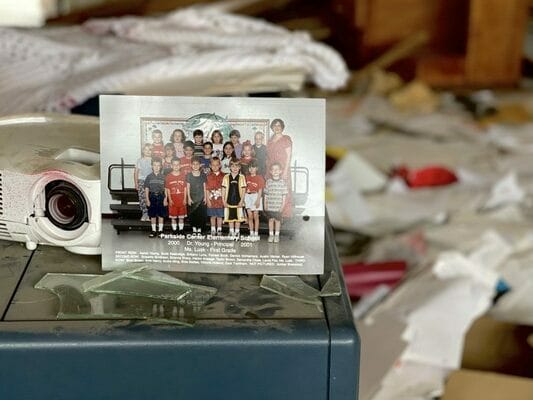 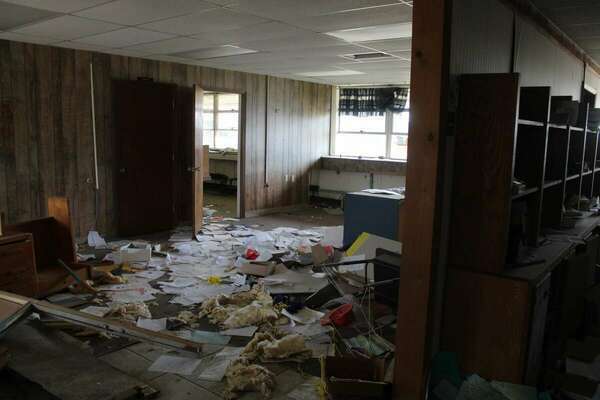 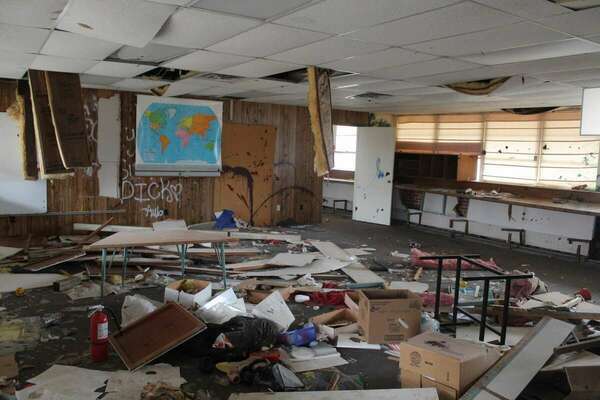 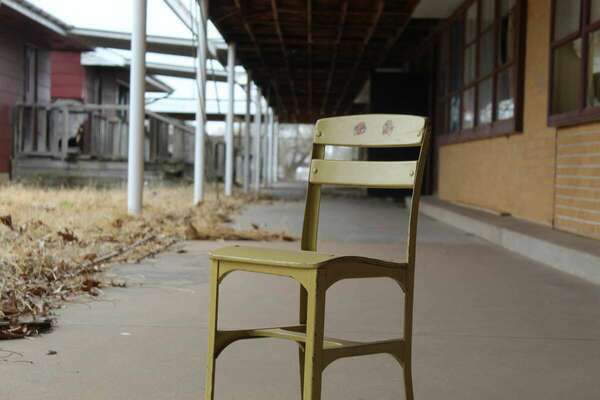 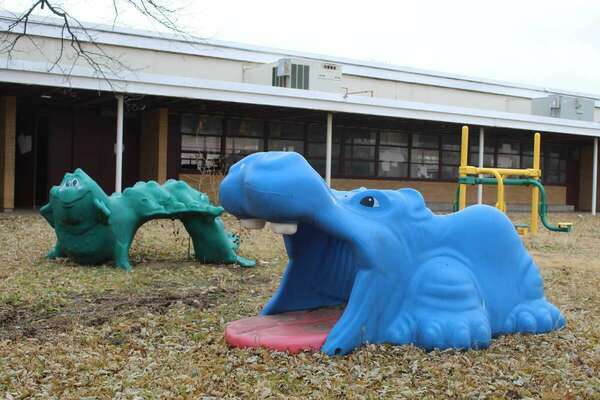 (Tap through for more photos)

Walking through the offices at Blackwell’s former Huston Center school, shattered glass crunches underneath your heel.

Stray papers strewn across the floor ruffle in the breeze from the splintered remains of the rectangular windows.

The soft smiles of children and teachers from class photos taken in the early 2000s stare past the flashbulbs of the school photographer and out into the ruins where they are now trapped and left behind.

Faces in the wreckage.

There is an old saying that one can return to the past any time, but no one will be there.

That saying comes to mind with Huston, a place so many of Blackwell’s millennials passed through.

It was a place where the imagination and wonder of youth was untainted, one of the last true childhood eras where Poke-Mon trading cards were dealt like prison contraband beneath the jungle gyms and when “internet learning” was an expression that only applied to lag-prone reading tests on antiquated, boxy computers.

Leaving the office and walking down the open-air corridor, chairs are kicked over into the lawn.

Your shoes clap on the cement, echoing far through the abandoned institute.

Graffiti mocks the silence and hallowed ground that once was a site of learning and education.

An expletive here, a name there, a heart with initials. Peeking into the classrooms, desks are piled high or toppled over. Workbooks are ripped by the elements. Computer modems are rusted and cracked open, spilling their entrails of wires and fans out onto the matted floors.

Patches of deep black and gray mark the spots where fires had been lit and snuffed out again. The same walls where many children had likely stared through holes to avoid busywork and reading assignments are broken and splintered.

Playground equipment is faded and taken back by the Earth.

Trees are sagging and overgrown. If one weren’t mistaken, Huston could be an apocalyptic movie set.

The noise and laughter of three generations is silent, with only the creaking of old gates and the rustling of dead leaves to be heard.

Huston Center is set to be demolished sometime within the next few months to make way for a Freedom Homes, LLC, duplex housing complex.

For the last eight years, Huston has sat vacant and left to the cruelty of time. Now, it looks as if the faculty and staff left for a brief trip and never returned. Huston was once part of the Blackwell Public School district’s sprawling empire, which included Northside, Parkside, Washington and Huston centers, Blackwell Middle School and Blackwell High School.

The school opened in October 1949 to house nearly 200 children in grades 1-6 after a devastating tornado swept through Blackwell, completely leveling a former south Main Street school earlier that summer.

Huston was named after a former superintendent, Harry Huston, and was opened in tandem with Washington that fall.

The school was the brain-child of celebrated architectural firm Caudill, Rowlett, Scott, and Associates and was cited in Huston’s 2009’s National Register of Historic Places approval as “an excellent example of mid-twentieth-century Modem style school design” for which the firm the firm achieved “nationwide acclaim in school design in the 1950s and early 1960s.”

Through the decades, Huston’s grades would change, and new wings were installed until the waning years of the 20th century.

It became the “last stop” on the way to middle school, housing 4th and 5th grade students until 2009.

The elementary school was built with safety and efficiency in mind, acting as a way to house first through fifth-grade students instead of having them scattered across the city. Huston found itself home to Pre-K and Kindergarten classes.

In 2014, three weeks before the 2014-2015 school year began, Blackwell Public Schools officials made the controversial decision to migrate the Pre-K and Kindergarten children there to the then-relatively new Blackwell Elementary School.

“As a country kid, I attended 1st grade there before the centers were created,” Moore recalled.

“I remember competing in a spelling bee in her class and getting out on ‘pickle.’ I also had Mrs. Johnson for music and Mrs. Hoose for PE. I remember having to climb the peg wall and run the 9-minute mile in PE, which were both hard for me. “I remember the huge playground with colored barrels that we used to play in and on. We also had the old metal and wood merrygo-round. I remember a classmate, Ty Stevens, breaking his leg on it. At the south end of the playground was a huge tree that we all used as base for different games. I remember the innocence of playing on that playground, pretending to be a horse with Darolyn Crow and Geisalla Rice."

“I also remember our cafeteria being in the middle wing and [us] eating off the hard plastic trays. I never understood why our meal tickets that we had to hand to Mrs. DePriest were different colors. I had no understanding of free/reduced meals. Things like that were not discussed, and private only for adults to know.”

Moore returned to Huston as an adult and remembers the way it had changed.

“As an adult, I was a counselor at Huston Center,” she said. “Things seemed so small compared to my memory as a child. We had the shelter to use for PE and lunch, which was not there when I was a child. The old PE room was now the faculty’s lounge and a multi-purpose room. I never remembered the bathroom being as cold and smelly as a child as I noticed as an adult.”

Moore’s life, along with most educators in Blackwell, was turned upside down in the summer of 2014.

The problems were mounting for Huston, an aging school that had to be changed as the world around it seemed to darken. The open-air halls and winged structure, in vogue at the time, became monumental safety hazards against the possible threat of intruders. But it wasn’t just that.

Under the superintendency of Monte Sill, Huston had been written up for various violations, Moore remembered.

“The issues were never addressed or corrected, which made it unsafe to house children,” she said. “It was my understanding that had he addressed or at least begun addressing some of the issues, the district would have been given a grace period to rectify the problems. Since Mr. Sill did not begin or come up with a plan, it was the fire marshal’s decision to shut it down.”

Moore said many teachers were hopeful that, at some point, the building could be remodeled and used.

“However, with the extent of issues, not just fire code, but asbestos too, this was just not financially feasible for our district,” she said. “Getting the news of Huston Center closing so close to the beginning of the school year was quite a shock. At the time, I was an assistant principal at the new elementary school. I had to create a schedule to relocate our existing classrooms and teachers so we could accommodate the classes from Huston."

“Everyone was given a map of where they would be moving, and they had about two days to get moved so the next group of teachers could move. The new principal that was assigned to BES, Kenda Miller, didn’t live in Blackwell, so she just left it up to me. I don’t think she came to town to help with the move, but we definitely felt the support of our community. We had the help of so many volunteers that everyone was moved and settled in the matter of only a week and a few days.”

If Huston looks like it was left in a hurry with the faint promise of a return, Moore said that is at least somewhat true.

“I don’t think anyone truly believed this was temporary, maybe just hopeful,” she said.

“Things were left behind because we left in such a rush,” she said. “Many teachers and staff as well as principals made numerous trips back over the next few years getting items to bring over. However, it started to be vandalized, and things were getting destroyed. Some of the items were there as a place to store it since we were busting at the seams at BES.”

As time went on, salvaging anything from the school seemed less and less likely.

The promise of an abandoned building was too tempting for the whims of vandals.

“Mrs. [Melissa] Agee and I visited Huston several times when I was the principal at BES and she was the assistant principal,” Moore said. “We could always seem to find some hidden ‘treasure’ that could be salvaged and used, until the vandalism became too great and too much was ruined.”

Elementary teacher Mindi Tripp has fond memories of Huston as well. It’s where she grew up, where she attended school and where she landed her first teaching job. It was her dream job, actually.

“I grew up around there,” Tripp said while talking over the busy work of her students at Blackwell Elementary School.

“My mom worked there. I spent a lot of time on that playground, of course. Every time it snowed, we were there.”

Tripp attended 4th and 5th grade at Huston. Life later took her to college until 2003, when she began teaching at the same place she had always wanted.

Tripp taught at Huston before Blackwell Elementary opened and she found her new home.

“When we found out that Huston was closing ... it was sad,” she said.

“Understandable, but sad. It was an older building, and we had this newer one. I wasn’t ready for it to happen when it did.”

“It was the only classroom I had ever known,” she said, remembering when staff initially left for Blackwell Elementary.

“I obviously understand the safety concerns about Huston and everything that led to the closure. But there were some things about that building that we’ll never have today, things that I miss – like the connecting rooms. That was so nice to have."

“It was fun teaching at the same school that I, myself, had gone to,” Tripp said. “I was two doors down from where my mom’s classroom was.”

“My best memories and the things I miss involve the staff. Luckily, I still get to teach with a lot of them, but I really miss the ones that have retired over the years.” She, like Tripp, misses the architecture as well. “We had such great decorations for those huge walls of windows,” she said.

“I also miss being able to prop open up the doors and windows to let the fresh air in. And, most importantly of all ... we loved the door that slid open between the classrooms.” Teacher Deidra Sixkiller also grew up at Huston, attending school there in the 3rd, 4th and 5th grades.

“I miss having those windows to decorate and coordinate with the seasons and holidays, and a door that would open outside for fresh air. I often left mine open all day long.”

Sixkiller’s love for those windows came back to bite her too, she joked. “I remember working after dark with all those windows,” she said. “My husband and children loved to come up and bang on them and scare me.”

When Sixkiller found out Huston was closing, she described it as a “sad void.”

“Huston had been our home away from home for many years,” she said.

Huston now is a mausoleum, a collapsing structure simultaneously frozen in time and ravaged by it.

But there will come a time, soon, where Sixkiller’s void will be just that: an empty space, a non-existence.

One day, Huston will be a memory preserved in photos and memories and nothing more. It will be buried beneath the foundations of housing. But for several generations of parents, teachers and students, Huston was a special place. It will live on, like so many of Blackwell’s forgotten structures, in memoriam.