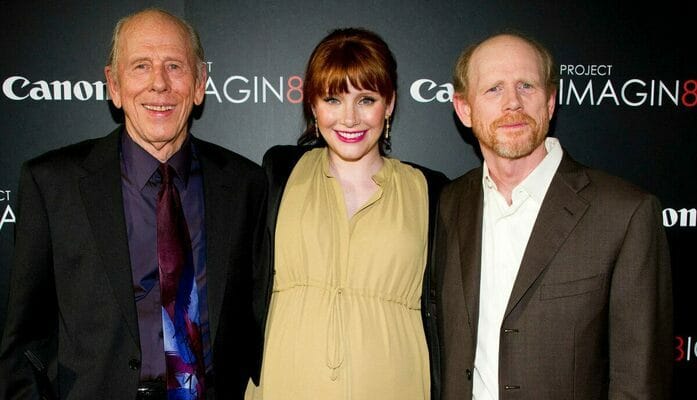 Editor’s Note: This is the first installment in The Journal-Tribune’s series “Famous and Forgotten: The Untold Stories of Entertainers from Northern Oklahoma.” The series highlights entertainers of the past who had connections to the region.

Try to imagine an episode of “The Andy Griffith Show” without Opie. Hard to do, right? It’s a lot easier to picture the series without the man who acted as the pastor who married Barney and Thelma Lou.

But in real life, without the man who played the pastor, there would be no Opie.

Ron Howard, who portrayed the good-natured son of Mayberry Sheriff Andy Taylor, was the real-life son of actor and Kay County native Rance Howard, who played the pastoral role during one of his few appearances on “The AndyGriffith Show,” where his son rose to fame.

Rance Howard was born in Newkirk on Nov. 27, 1928. His birth name was Harold Engle Beckenholdt. Howard grew up attending Shidler Public Schools, where he got involved with school plays.

“I was suddenly transformed into the character I was playing and realized I had control of the audience,” Howard told The Oklahoman in 2014.

“When I came back to Earth a few days later, I knew I wanted to be an actor.” Howard graduated from Shidler High School in 1946 and attended the University of Oklahoma. That’s where he met his wife, Jean Speegle, a Duncan native. They married in 1949, and Ron was born in Duncan in 1954, despite the couple’s acting career taking them across the nation.

The family was living in California when Clint was born five years later. The couple tried to keep their sons away from the pitfalls of fame and fortune, Howard said in multiple interviews.

“We were well aware of all the traps that Hollywood parents and children fall into when the child becomes the breadwinner,” Howard told The Oklahoman. “We were determined to live on what I could afford and put the boys’ money away for them.”

Both Rance and Ron Howard got their feature-film debuts at the same time – and in the same film. “It was called ‘Frontier Woman’ in 1956, filmed in Mississippi, and about Daniel Boone’s daughter, Polly,” Howard told The Oklahoman. “Jean also had a part, and we wanted to somehow get Ron into the picture, too. He was only 18 months old, but we thought it would be wonderful for our parents to see their grandson in a movie with us. … My character gets shot with an arrow then plunges off a balcony, and the director asked if I could do the stunt. I did it, and he was so pleased he told me to bring Ron the next day and (he) would work him into the movie.”

Howard’s career never rivaled that of his son’s.

However, he had roles in several of Ron Howard’s films, such as “Apollo 13,” “Parenthood,” “How the Grinch Stole Christmas,” “A Beautiful Mind,” “Angels and Demons” and “The Dilemma.”

Ron Howard spoke about his father with the Hollywood Reporter before his father’s death, saying: “He has an undying love of the process, which has made him appreciate every day on a film or television set. And he’s never lost the youthful excitement for being a part of a process that tells a story that reaches audiences in different ways and reflects the work of a team of collaborators that shares that excitement and that always rubbed off on me, that joy of being lucky enough to be among the storytellers.”

Nobody has said publicly whether Rance Howard ever made it back to Kay County.

In an interview in November 2021 with the Tulsa World, Ron Howard said of his father: “He worked every day of his life as a boy on the farm and he pretty much worked every day of his life as an adult, preparing to audition, preparing to learn his lines so he could perform when he had a job, preparing to be in good shape so that when he went on an audition he was ready to go and also coming up with his own ideas pitching scripts and writing them. He also did his own chores. I hated doing chores. He liked it. He liked to mow his own lawn and fix his fence. He fell off the roof one time when he was about 70 years old. He dislocated his shoulder, but he shook that off. He was a pretty tough bird and very self-sufficient.”