Hollywood's best poster designer is here in Blackwell: they just don't know it. 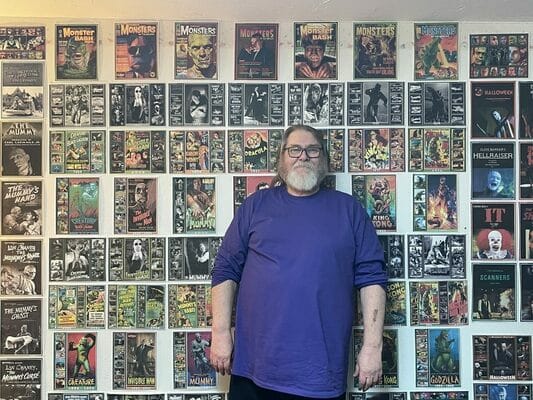 There are many stories to be told in The Hillcrest Manor Nursing Home, and guest Robert W. Rutherford tells his through film.

More specifically, the “art” of film. 400 and counting.

Some resemble the splashy theater lobby displays of old, some are bold new takes and interpretations of theatrical posters.

But it’s not just the classics- the iconic Ghostface, Jack Torrence, Jason Voorhees, Freddy Kreuger, Norman Bates, and Leatherface are there too, their decades of silver screen slaughters preserved alongside the legacies of the Predator, the “Alien” series Xenomorph, King Kong, and Godzilla.

The walls of Rutherford’s room at Hillcrest Manor are long gone, replaced by thousands of hand-crafted posters and collages of films, superheroes, video games, brands, and other niche topics.

These pieces of art are all crafted digitally by Rutherford, who spends anywhere from 4 to 8 hours on a given project. And the part that always seems to shock those that ask?

Yes, that Excel. The grueling spreadsheet application that made any computer class or job a living Hell.

“People always tell me to use PhotoShop or this, or that,” Rutherford laughed, sensing the disbelief when he revealed Excel was the canvas on which he crafted his masterpieces, “but I have gotten so good with it. I love working with Excel.”

“Excel was the only program I ever taught myself and people have told me to use Photoshop and other programs but why fix what isn’t broken?” he recounted, going over his works.

Whatever magic Rutherford uses or whatever deal he made, it has clearly paid off.

Rutherford sat comfortably in a recliner just before Christmas when the halls of Hillcrest Manor were filled with family visitors and carolers as he gushed passionately about his hobby.

“I’ve been doing this for about 15 years,” said Rutherford, “it came from me being a fan of horror- the classics, you know, Dracula, Frankenstein’s Monster, the Wolfman. And being here in Oklahoma there are not a lot of places to find any movie artwork or anything to put on your walls. So I just started making my own.”

Rutherford said that his room, initially, felt so sterile and blank. Now, he’s right at home.

“This will never be duplicated,” Tim Carroll, the physical therapist at Hillcrest said, sitting in Rutherford’s room, as in awe as anyone else at the century of cinema brought to life.

“Robert was my patient, he had a few on his wall at the time, and a bit later I came in here and- wow!” “It’s a fantastic ability that he has, it’s incredible.”

Rutherford was inspired by the design elements of the 1950s and 1960s when promotional material for films that hung in theater lobbies or were featured in magazines had cast breakdowns, synopsis, and more.

“I do these for different people. They might come into my room or talk to me and go ‘have you ever made a plaque of …?’ and I’ll do it. I get on my laptop and put them together. I have just made Christmas ones obviously for the holiday, I made a religious one for one of the pastors that came through here. I love a challenge, I love to tackle new things,” said Rutherford.

Rutherford grew up around movies, and that has resonated with him through the ages. “My mother loved films and movie culture, we’d watch the Academy Awards, watch Johnny Carson with all the celebrities. And that has been a major part of my life going forward.”

Rutherford is currently a member of several Facebook groups and internet groups for cinema and pop culture lovers where he posts his posters – or plaques – to wide acclaim.

“Anyone that wants one made can feel free to message me on Facebook,” he said proudly, “it keeps me busy. Sometimes I’ll wake up in a cold sweat with an idea, and I just have to see it realized. I’ve been doing superhero and videogame ones for my grandchildren, there’s nothing I’m afraid to try.”

Rutherford’s eye and attention to detail (dog-eared corners, wrinkles, faded colors) have tricked many, including some Hillcrest residents.

“I have people come in and go ‘holy cow, how did you get your hands on a display that looks that good still? It must have cost a fortune, and I tell them I had re-created that on my computer and just printed them out on paper, and they’re shocked.”

Of the works in his room, his favorite pieces belong to The Bride of Frankenstein. Elsa Lanchester’s character from the 1930 films. Her iconic white and black hair and chilling scream were captured in dozens of instances across Rutherford’s walls.

“It was funny, you know, I had the Bluray box set of the Universal horror films gifted to me a few years ago. Stunning quality, and some of the best transfer work I’ve ever seen. And I...I fell asleep to them,” he laughed, “they’re so boring and dry, you know? But that’s the appeal. That’s what I grew up with. The films now are so different, so fast-paced, it’s an entirely different world now.”

Rutherford’s key focal point with these works is the color schemes.

“I spend hours sometimes before I even start just looking at the colors and compositions,” he said, “I’ll go combing through Google and I spend weeks sometimes on Pinterest and I end up with files upon files just looking for the right framing. I think I have over 10,000 of these plaques in my database.”

Some days he does 4 or 5. Some days he does none. It’s all about the inspiration and the art for Rutherford, and it is clear these aren’t quick photoshop jobs with a simple filter and adjustment of lighting.

Rutherford reveres the art of cinema, and his own art reflects that.

Rutherford is a man who would talk for hours about his artwork, his art of honoring those that came before. Of a world that, by and large, no longer exists. But they still exist to Rutherford. They still hold that same magic now that they did when he was a child.

“That’s what cinema is,” Rutherford said, “I love the old stuff.”

“I get a lot of visitors in here, I’ll have people sitting around just talking, admiring the works, getting lost in these little windows to different worlds.”