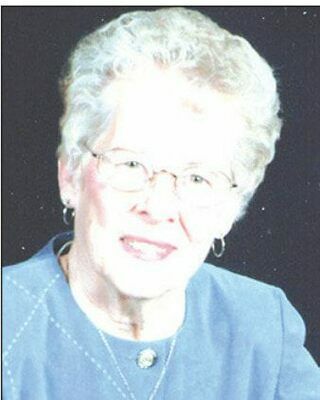 Marian Lucille Collyar (Weigle) passed away peacefully on December 22, 2022. Survived by her husband of 70 years, Robert “Bob” Collyar. Also survived by sister Wilma Stone, son Donald, grandchildren Kate Huberty (Charley) and Joe (Alicia), great grandchildren Evelyn, Abigail, and Jack Collyar, Madeleine Huberty, and many nieces and nephews. Preceded in death by her son Daniel, “Danny,” who was married to daughter-inlaw, Sara. Also preceded in death by sisters Shirley Weigle and Helen Pennington, and brothers Harvey and Gerald Weigle. Marian grew up in Blackwell, OK. 1952 was a busy year for her. She graduated from Blackwell High School, married Bob on September 19, and moved to Arkansas City, KS to begin married life. Marian worked at Rodeo Meats for 30 years, also at Gordon Piatt Energy Group and Heatmizer, Inc before retiring in 1992. Bob and Marian moved to Kaw City, OK in 1991, and moved to Ponca City, OK in 2005. Bob and Marian traveled with good friends for many years to winter in Harlingen, TX. Bob and Marian would also summer in Denver, CO to see Dan, Sara, Kate, and Joe. Bob and Marian were dedicated Square and Round dancers, teaching and cueing for over 35 years all over Southern Kansas and Northern Oklahoma. There will be a graveside service to celebrate Marian’s life on January 14th at 2:00pm at the Blackwell Cemetery. Marian was very loving and was very loved. She will be missed. On-line condolences can be made at www.robertsandsonfh.com