AVATAR: THE WAY OF WATER is a jaw-dropping masterpiece 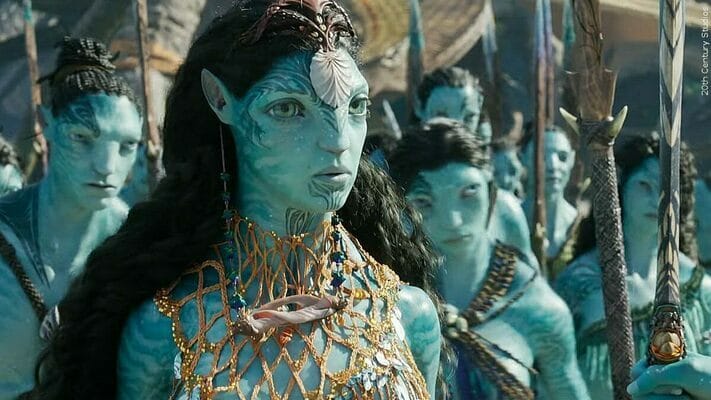 “The way of water has no beginning and no end. Our hearts beat in the womb of the world. The sea is your home, before your birth and after your death. The sea gives and the sea takes. Water connects all things: life to death, darkness to light.”

James Cameron’s long-awaited sequel AVATAR: THE WAY OF WATER debuted in December after 13 years in various stages of development including changing studios from 20th Century Fox to Disney’s 20th Century Studios after The Mouse House acquired Fox in a 2018 takeover and a global pandemic that nearly brought movie theaters as a concept to their knees.

The result of a 13-year production and the weight of the world on Cameron’s shoulders for a $400 million+ budgeted film?

Cameron is a man who has perfected the sequel, with two of his most well-known films being follow-ups to other works (his own or another director’s) are 1991’s TERMINATOR 2: JUDGEMENT DAY and 1986’s ALIENS. Sequels are Cameron’s specialty, and this is no exception.

THE WAY OF WATER picks up 15 years and some change after the events of 2009’s AVATAR.

Jake Sully (Sam Worthington) is a tribal Na’vi leader with his wife Neytiri (Zoe Saldana) and their three children Neteyam, Lo’ak, and Tuk. They have added some stragglers to their little family to: Kiri (a hybrid born of seemingly immaculate conception from Grace Augustine’s inert Avatar) and the human boy Spider- the son of baddie Miles Quaritch (Stephen Lang) who was left abandoned on the RDA base when the humans left.

One day, the sky turns to fire and signals the return of the humans and the RDA company. Back for more. This time to terraform Pandora into a new Earth and to harness the resources from the Pandora whale-creatures that can prolong human life.

Among the Marine forces this time is a new threat- Recoms. Recombinants, Na’vi Avatars which are implanted with the minds and memories of fallen human soldiers. The leader of these Recoms? Miles Quaritch’s Avatar.

As the Marines hunt and kill in an attempt to find the Na’vi’s resurgent leader Jake Sully, he and his family flee to the ocean to hide among the Metkayina reef people.

Now, Jake must face his fate as a leader and defend his family (and his people) once and for all against the Earth’s military might and an arch enemy back from the dead hell-bent on finishing what he started in another life.

I’ve seen the criticism that if AVATAR (2009) was “Save the Trees” then THE WAY OF WATER is “Save the Whales” and that’s not entirely false, but it undermines just how simplistic (and great) this sequel and it’s predecessor are.

Cameron changed the game in the 2000’s with Avatar’s use of 3D imagery. Now, he’s doubled down on that and made one of the most visually engrossing and technologically advanced films I’ve ever seen.

THE WAY OF WATER is about 2 and a half hours long, and I saw it at noon on a Sunday in Wichita’s IMAX 3D theater and it was breathtaking. Myself, my two friends, and a hundred other people stared in awe at Cameron’s blockbuster prowess. It’s funny, it’s action-packed, it’s beautifully shot, it’s gut-wrenching, heart-stopping...it’s a perfect action movie that stands alongside T2 and ALIENS as another sign that James Cameron is not to be trifled with.

THE WAY OF WATER has so many interesting things going on in it that it is hard to even explain them all in a short movie review and gush about how well they work.

You have Jake’s son Lo’ak and his budding romance with the tribal water Na’vi girl Tsireya mirroring Jake and Neytiri’s romance in the first one. You have Recom-Quaritch reborn as a Na’vi Avatar who begins to understand the planet Pandora and develop and begrudging respect for it, paralleling Jake’s jarhead-turned-jihadist development in the first film. You have Spider, the “Pandora Tarzan” also being compared to Jake (minus the fact he has no Avatar).

There are so many narrative parallels here. So much going on that blends and bleeds into other aspects of the film.

THE WAY OF WATER spends a good chunk with Lo’ak as he bonds with one of the ocean’s colossal whale-beasts,The Tulkun. He and this creature (named Payakan) develop a close bond and it allows Lo’ak to, in turn, develop a closer bond with the titular “way of water”, the creed that the oceanic Metkayina all abide by.

He, like his father, is a man of one sense attempting to become something else entirely. Whereas Jake was a Marine becoming a Na’vi Omaticaya (tree people), Lo’ak is an Omaticaya becoming a Metkayina. He is abandoning one way of life for another, and all the pitfalls and triumphs that come with that.

Along with all of this you also have Quaritch’s Recom attempting to become a father-figure to Spider the way Quaritch wasn’t able to. As Quaritch’s Recom tells him “I’m not him”. He’s just a creature with the man’s memories, but the Recom is very much his own “person” as he discover.

The big mystery presented through THE WAY OF WATER is Kiri, the Christ-parallel born from Augustine’s (Sigourney Weaver) vegetable-like Avatar. Kiri is voiced by Weaver as well, and it iw holly convincing that the 70-year-old actress is a 15-year-old girl.

Kiri has a deep connection with Pandora: with the nature, the wildlife, and the diety that guides it all Eywa. She very much is being set up as a crucial plot-device moving forward. She brings the film’s philosophical depth this time.

Unfortunately, the only character in THE WAY OF WATER that not only gets brushed over but neutered heavily is Sully’s wife Neytiri who was the soul of the first movie.

The film leads to a magnificent final act that blends the best of Cameron’s set-piece sensibilities: it becomes the Xenomorph Queen / Titanic sinking / T-1000 vs T-800 all at once. It is so insanely good.

AVATAR: THE WAY OF WATER is a film that should be seen ASAP on the biggest screen possible, but any screen will do. Just see it. Witness it. Live it.

Need a New Years Resolution? Here's one you mig...