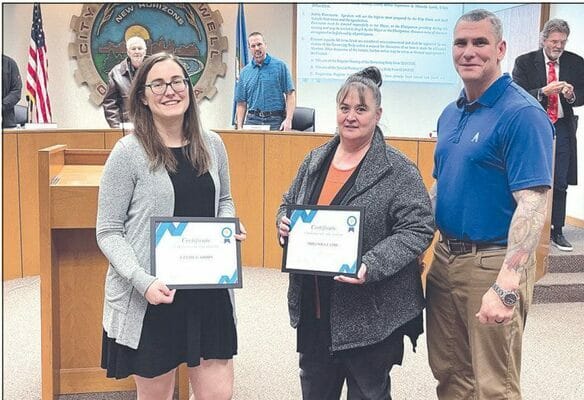 The meeting began at 6 p.m. City Manager Jerry Wieland recognized Gaddis and Lamb for their work in the utility department. The two took on extra work as a coworker went on maternity leave.

After the recognition, Council members heard reports from city department leaders, including Chief of Police Dewayne Wood. He noted that the city’s two new police vehicles are now, after more than a year, on the street.

The Council’s big-ticket items for the night included the re-approval of an automatic aid agreement with the City of Tonkawa Fire Department and the City of Arkansas City Fire Department. The item is set to be voted on every year, ensuring cooperation between Blackwell and the other two agencies in times of emergency when one city needs help from another.

The Council also heard from Fire Chief Cory Hanebrink and approved the received bid for a 3500 Dodge Cab Chassis ambulance truck. The Council approved the purchase of concrete, sand, rock and other materials from Diemer Construction, Leroy’s Ready Mix and Evans & Associates for the City of Blackwell’s Streets & Parks Department.

Also approved was a mutual aid agreement with the Municipal Electric Systems of Oklahoma. The agreement allows member cities and towns to work together in cases of emergency for instances of disaster relief and reconstruction.

K & M Dirt Services was awarded the contract for the demolition of HustonSchool. Work will begin in February, and the demolition is expected to last a matter of weeks.

The Council convened in an executive session to discuss the matter of property on Main Street, specifically the derelict building on Main Street and Blackwell Avenue.

The Council gave Wieland full authority to bring in a new business to set up shop at the corner location. No information was disclosed at the meeting on what the business Wieland and the City of Blackwell have been in talks with.