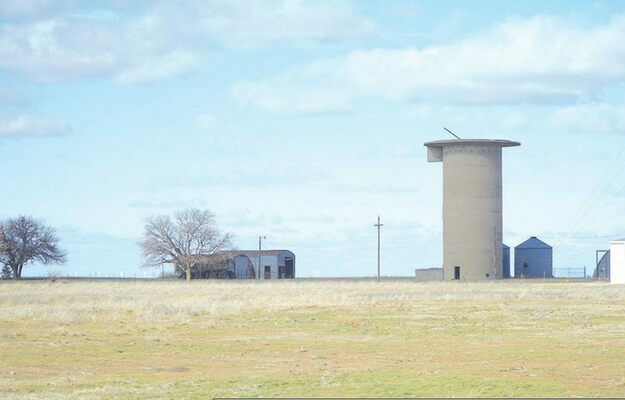 Gracing the horizon like a grain silo, a gray concrete water tower base still stands about a half-mile north of Tonkawa on 13th Street.

When people new to Kay County see the abandoned cylinder-looking structure for the first time, they ask: “What is that?” Then the story begins.

The water tower is one of the last visible remnants of Camp Tonkawa, a World War II prisoner of war facility that housed thousands of Nazi soldiers during the 1940s.

The camp is but a memory, and the water tower is one of the last few scars it left on the land. But for the German soldiers who called Tonkawa, Oklahoma, United States, home during the war, it was a place where the best and worst sides of humanity were on full display.

The U.S. Army began construction of Camp Tonkawa in October 1942, according to a 2021 research article in the Chronicles of Oklahoma historical publication. The piece was researched and written by Nathaniel Marshell, who was a senior history major at Southeastern Oklahoma State University.

The Army picked the location because of the region’s “favorable topography” as well as its proximity to utilities, Marshell wrote. The first prisoners arrived in August 1943 on Chicago, Rock Island & Pacific Railroad trains. Armed troops marched the prisoners along Main Street from the railroad depot to the camp, Marshell wrote.

Prisoners were finger-printed, assigned numbers and given clothes upon their arrival at camp. They were housed in barracks regardless of rank or branch. The barracks were made of tar paper and wood. Each barrack housed 40 prisoners, and bathrooms – complete with hot running water – were in nearby buildings. The camp had a total of roughly 180 structures. At Camp Tonkawa, the soldiers’ daily lives took a much different look from anything they were used to at home or on the battlefield.

German paratrooper Werner Puls voiced the sentiments of many prisoners when he wrote in a letter that captivity at Camp Tonkawa was “always better than Russian captivity!” Puls was imprisoned at Tonkawa for roughly seven months, Marshell wrote. But like many other prisoners, a good portion of his time was spent outside the camp fences.

Inmates were allowed to work outside the camp. Many found employment at local farms and ranches, earning 80 cents per day that they could spend at the camp canteen. Some worked at a local alfalfa drying plant, and others took jobs within the camp as mechanics and waiters in the officers’ club.

Using their earnings, inmates could purchase toiletries, tobacco and other goods at the camp canteen, and they were served three meals per day. They also had the opportunity to take courses for college credit, though no records indicate whether any certificates were awarded, Marshell wrote. Community volunteers taught the courses. One volunteer, Louisa Doenges, even cooked snacks for her English students – “no doubt making her class one of the more popular,” Marshell wrote.

Prisoners could play sports, make arts and crafts and socialize during their free time. They even hosted musicals for the public that were sponsored by businesses such as the Blackwell Printing & Stationery Co. and the West-Dyer’s furniture store. A Catholic priest, Fr. Stephen Leven, conducted a Sunday mass each week for Catholic inmates. A Lutheran minister from Blackwell, Martin Porath, conducted services for Protestant inmates.

Fewer than 10 prisoners ever tried to escape from the camp, Marshell wrote. All prisoners were either found or returned on their own. The life of a prisoner at Camp Tonkawa was, as Marshell wrote, “relatively peaceful and mundane” – most of the time.

MURDER AT THE CAMP

Although the inmates were well cared for, they still knew the war was going on – and they felt the stress. Many were “angry, frustrated and distressed,” Marshell wrote. “These powerful emotions boiled over on the night of November 4, 1943, in what is perhaps the most infamous, albeit uncharacteristic, event in the story of Camp Tonkawa,” Marshell wrote. That night, many of the men gathered in the mess hall at the request of prisoner Walter Bayer.

He made a shocking allegation: “a traitor was amongst them,” Marshell wrote. Bayer read some letters from a prisoner identified as Johannes Kunze, who was, in fact, an informant for camp officials. His letters were intercepted by another prisoner, Karl Heisig. Kunze tried to run out of the mess hall, but other prisoners beat him, Marshell wrote. Some picked him up and threw him against a concrete wall. By the time a prisoner told camp officials about the incident, a doctor and paramedics arrived to find Kunze dead. “The subsequent investigation, which focused mostly on prisoners who were found with blood on their clothing, saw five prisoners arrested, tried, and convicted for the murder of Johannes Kunze,” Marshell wrote.

Found guilty were Bayer, Berthold Seidel, Hans Demme, Hans Schomer and Willi Schols. They were hanged at Fort Leavenworth on July 10, 1945, Marshell wrote. Bernhard Pollei, one of the first prisoners at the camp, wrote about the murder: “I think many wanted to punch [Kunze]. Maybe it was not right to kill him, but it was not right to hang five, because 249 men are guilty. One hit him. The others did not say ‘stop it,’ me too.”

Kunze was buried at the camp.

No prisoners attended his funeral, Marshell wrote. The story of the murder was recounted years later in a book, “The Killing of Corporal Kunze,” by Blackwell native Wilma Parnell. She wrote the book with Robert Taber, who worked for CBS News, The New York Daily News and The New York Post.

Life at the camp returned to “normal” after Kunze’s murder, Marshell wrote.

The need for agricultural laborers decreased because of improving farm machinery, and the inmate labor program eventually ended. The camp transitioned to housing noncommissioned officers. The camp closed on Sept. 16, 1945, and prisoners were loaded on trains to be taken to the coasts so they could start their journey home. “After the war, many former prisoners acknowledged the fair treatment and kindness shown them at Tonkawa,” Marshell wrote. Some “clearly stated how American guards and volunteers at the camp always acted in an affable manner toward the prisoners, oftentimes having conversations and even building friendship with their ‘enemy.’”

Those friendships lasted lifetimes. Former Tonkawa Mayor Evelyn Coyle received letters from two prisoners, including Pollei, into the early 2000s. Pollei returned to Tonkawa in 1995 to visit families and people he knew. “You couldn’t ask for a nicer person,” Coyle said in the Chronicles of Oklahoma article. Some of the prisoners never left the United States after the war. Russ Burger, president of the McCarter Museum in downtown Tonkawa, said many came to love the region and its people, who welcomed them. “There was no discrimination basically,” he said. “They knew their homeland in Germany was going to be bombed and torn up.”

The camp land was sold off in later years, and some of the buildings became housing for students at Northern Oklahoma College. In 2001, a historical marker was placed near the south side of the camp. Some of the structures from the camp still stand in and around Tonkawa. A few of the officers’ houses were moved to 9th Street and were made into rental homes. At the camp site, a tall, brick chimney from a building still stands, as well as the water tower base.

The McCarter Museum in downtown Tonkawa continues to commemorate the camp. The museum has numerous photos of the camp as well as artwork created by prisoners of war.

“The legacy of Camp Tonkawa, despite the tragic stain of Johannes Kunze’s vicious murder, remains one of kindness, respect, and understanding,” Marshell wrote. “Citizens and soldiers alike treated men whom they considered enemies with common decency. For the men who found themselves captive in Tonkawa, their fair treatment profoundly impacted them for the rest of their lives. While having faded into relative obscurity, Camp Tonkawa is a shining example of how, even in the backdrop of a global ideological conflict, people are capable of showing one another kindness and respect.”