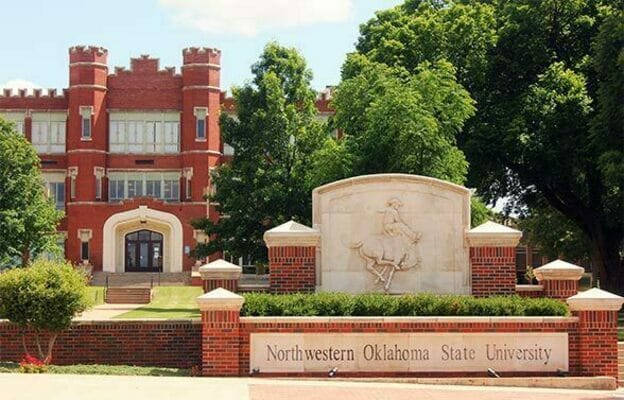 A couple weeks ago, two high school seniors from my hometown made a trip out west to Alva, Oklahoma.

They came to tour my soonto-be alma mater, Northwestern Oklahoma State University. For high school seniors across the nation, reality is sinking in.

In a matter of months, some will be making one of the most important decisions of their lives: where to attend college. Four years have passed since I was in that situation, but I still know the pressure they face.

I spent much of the fall 2018 semester applying to universities in and out of the state, naively thinking that the price wouldn’t be too high. It was about this time of the year when window shopping turned into looking at the price tags. Ouch! After that, I researched Northwestern. I’d only heard about it a few times, even though I lived only an hour and a half east of Alva. At the suggestion of one of my favorite teachers, I applied here, thinking I might give it a try for a couple of years and then transfer to another school. Little did I know that coming to Northwestern would be one of the best decisions I’d ever make – and not just because it was affordable. I was one of those people who overlooked smaller regional universities like Northwestern. Some people think small universities lack educational opportunities.

Others think there’s nothing to do in a town the size of Alva, population 5,000. To their credit, there aren’t many big parties around here (that’s a good thing), and you’d better like Mexican restaurants. But what a town like Alva – and a university like Northwestern – have to offer is something the big universities don’t. You may think it’s cliché, but it’s absolutely true: The people here are among the best you’ll find anywhere. Within the first two weeks of my freshman year in fall 2019, I found my friends. Through participating in choir, working on the campus newspaper and living in the dorms, I got to know some awesome, fun-loving and good-natured guys and gals who made my freshman year joyful and meaningful. We’ve gone on plenty of road trips and late-night adventures that we’ll never forget.

As a guy who didn’t have many close friends in high school, I can’t begin to tell you how much better they’ve made my life.

The kind of students you’ll find at Northwestern, and probably any other small-town university, are the humble, helpful, loving kind that good Midwest towns are known for. The same applies to the professors, faculty and staff here. As a mass communication major, most of my courses have about 10 students, give or take. We all get to know each other well, and the professors are that much more willing and able to help us whenever we struggle.

One professor even cooks for us sometimes. I don’t think you’d find that at an Ivy League. Something else I learned quickly about Northwestern is that, contrary to popular belief, you can find plenty of ways to get a taste of the career path you’re pursuing. In my major, students can work on the newspaper, broadcast media station or strategic communication agency. Other majors, like those in the arts, offer many performances and productions. The list goes on and on. As far as clubs are concerned, Northwestern has myriad opportunities to get involved in everything from student government to board games.

One can’t visit Alva without noticing its small-town charm, either. Its neatly kempt downtown square harkens one back to an earlier time in American history, when mom-and-pop shops were the bedrocks of their communities and people supported local businesses. That still happens here, and in turn, those local businesses fervently support students at Northwestern through fundraisers and scholarships. Alva and Northwestern are about as close to a time machine as you can find. And in a world where everything seems to change constantly, coming to a place where small-town values have remained the same is a thing of wonder. My time at Northwestern is coming to a close, and I still don’t know where nearly four years have gone. Graduation will be bittersweet.

Yes, I’m excited to see where God will lead me, but I’ll miss walking across this quarter-mile-wide campus and waving to folks I know and love. But even though time and distance may separate my friends and me before too long, the people I met at Northwestern will always be in my heart and on my mind.

But do you know what excites me the most?

The hope and the knowing that other people can find faithful friends and a bright future in this place. The same kind of friendly people who made Northwestern so great for me will be here to do it for anyone. Northwestern offers a quality education for a good price, and the value it’ll bring to your life is priceless. In about seven months, the two seniors from my hometown will be Northwestern Rangers themselves, and I’m more excited for them than they know. Soon enough, they’ll find out why