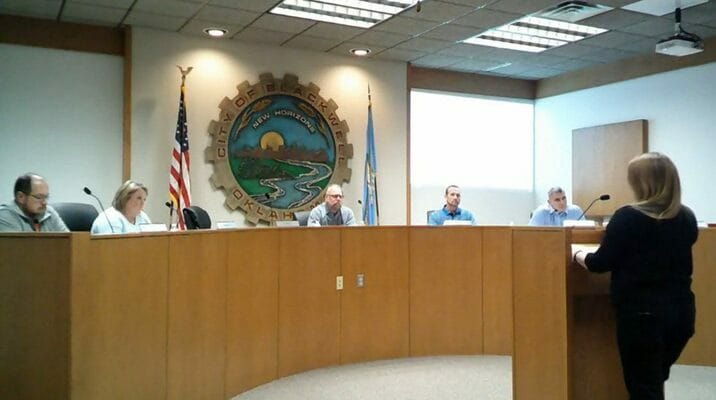 The Blackwell City Council met Thursday night to hear from Stillwater Medical Center – Blackwell hospital leadership regarding the facility’s proposed redesignation, among other items. The first meeting of the night began at 5 p.m. with the Blackwell Planning Commission, which conducted a public hearing on a lot split filed by Grand Lake Mental Health Center.

The Blackwell Hospital Trust Authority plans to transfer the north portion of the hospital property at 706 S. 13th Street to Grand Lake to be used as a mental health hospital and clinic.

After fielding some questions from residents in the area, the planning commission approved the transfer and split.

The City Council convened at 6 p.m. The first item of the night was a presentation from Courtney Kozikuski, president and CFO of Stillwater Medical Center – Blackwell, regarding a public notice to the Blackwell Hospital Trust Authority on the relicensing of the Blackwell hospital to be a “rural emergency hospital.”

Kozikuski said that, since taking the position in 2018, it had been an “interesting ride” weathering the global pandemic as well as battling rising costs of operation.

“The centers for Medicare and Medicaid have come out with a new designation – a rural emergency hospital,” she said.

“This was created in an effort to help smaller rural facilities not to close their doors.”

The new designation would allow the hospital to receive $276,000 per month in additional facility payments.

“The only thing that really changes is that [the hospital] would go from having a full in-patient [operation] to stays that would have to average around 24 hours,” she said. “Extended care past that would have to see the patient moved to another facility.

“Other than that, services would stay the same, so that’s the good news. We have a brand-new facility, fully opened. It’s beautiful.”

Robert Husted, acting as vice mayor because of Mayor Jon Webb’s absence, asked Kozikuski if the new designation would impact ambulance costs, including mileage and fuel.

By Husted’s estimates, the city stands to lose roughly $500,000 per year on transportation costs.

Blackwell Fire Chief Cory Hanebrink, who was in attendance, verified the financials.

Kozikuski said, “I understand that,” before a silence set over the room.

Councilman Chad Shepherd asked about the Blue Cross / Blue Shield insurance issue and why Stillwater Medical Center – Blackwell would no longer be accepting it.

Kozikuski said that, while discussions with the insurance provider are ongoing, the hospital would only accept that insurance out-of-network if an agreement is not reached. Husted asked about the hospital’s financial losses.

Kozikuski stated that losses since 2020 added up to $4.7 million.

“During the pandemic, outpatient visits were down, but they have been declining since 2019,” she said.

Kozikuski said the redesignation was the only option officials could see that would save the hospital.

The designation is pending a legislative move on the state level. Hanebrink approached the Council to further discuss the impact the new designation would have on the city’s EMS services.

City Manager Jerry Wieland asked Hanebrink’s opinion about the impact this would have not only on Blackwell’s emergency medical services but also on surrounding communities such as Newkirk and Tonkawa.

“If 911 is utilized by a patient, we’ll have to look at them with the optics of, ‘Is this going to be long-term care?’ And if it is a long-term scenario, we will likely be bypassing Blackwell instead of just having them here for a day and taking them to a long-term care facility such as Oklahoma City, Wichita, wherever there is a bed available. We will be on the road a lot,” Hanebrink said.

“What impact does that have on your department from a monetary standpoint?” Wieland asked.

“With the two ambulances we have in Blackwell on back-to-back calls on the road, we would leave Blackwell without an ambulance for 30 to 40 minutes at a time, probably,” Hanebrink said.

“And we would have to rely on mutual aid from surrounding areas,” Wieland said. “What impact would that have on services from Tonkawa and Newkirk?”

“Both of those agencies operate with two personnel at a station,” Hanebrink said.

“It could reduce time for them to come here, and if they’re out on another call in their respective communities, they might not be able to come at all. This would put a tremendous strain on everyone involved.”

In terms of fuel cost, overtime payment and other financials, Hanebrink said it is hard to predict the impact it would have on the Blackwell Fire Department and its EMS operations.

He noted that it would not only put a devastating financial strain on the City of Blackwell in terms of manpower, but also a burden on the department’s ambulances.

The Council then voted to approve the Grand Lake Mental Health lot split that the Planning Commission recommended for approval.

Next, the Council approved an agreement with Utility Technology Services, Inc. for an automated water and electric meter reading system. The new meters should be received within the next year.

Next, the Council heard from Chief of Police Dewayne Wood about redefining the City of Blackwell’s curfew ordinance.

“We’ve wanted to make some changes to this and clean up the language within this ordinance as well,” Wood said. The new curfew ordinance defines the age restriction for minors during the weekend as 16- and 17-year-olds and defines a “public place” as a “place open to the public.”

It also sets a $200 penalty, in addition to court costs, state assessments and fees, for offending minors, parents, guardians.

Wood said the new ordinance is an effort to curb an increase in juvenile-related crimes in Blackwell.

Wood returned to the lectern for the considered approval of a State of Oklahoma 911 mapping grant. The grant would improve 911 mapping and capabilities to match Blackwell’s new state-of-the-art 911 emergency system, which went into effect last year.

Next, the Council convened in an executive session to discuss a new retail business in Blackwell, which would be located at the site of the Dollar Tree.

The Council returned to open session after almost an hour.

Next, the BMA approved the purchase of four transformers for Blackwell High School in an amount not to exceed $135,000. The city will use American Rescue Plan Act funds to reimburse the company renovating the high school for the purchase of the transformers.

“We want to support the school,” Wieland said. The meeting ended shortly before 7:30 p.m.