You need to be watching HBO's PERRY MASON 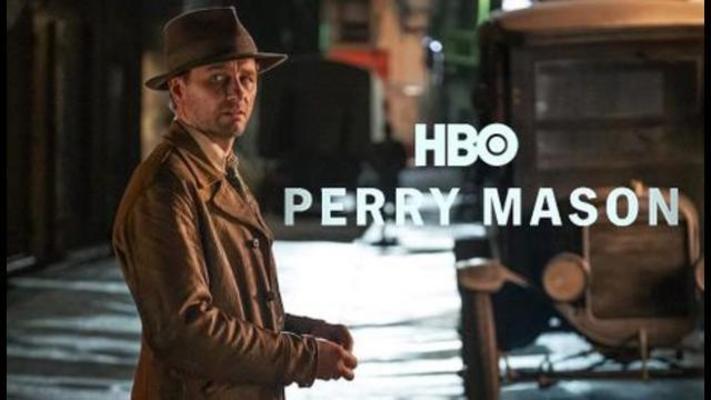 This isn't your grandparent's “Perry Mason”.

HBO has a knack for crime drama so gritty and grimy that you feel like a hot shower afterwards is a just reward for suffering through the latest round of whatever grizzled detective with stubble is chain-smoking through a horrific child murder case that season. In 2013 it was TRUE DETECTIVE, and now in 2020 it's PERRY MASON.

The 1957-66 courtroom drama centered around Raymond Burr as a defense attorney. This new limited series hails from BOARDWALK EMPIRE and FRIDAY NIGHT LIGHTS writers Rolin Jones and Ron Fitzgerald and acts as a prequel to the classic drama, set in the early 1930's starring Matthew Rhys of IT'S A BEAUTIFUL DAY IN THE NEIGHBORHOOD and THE AMERICANS fame.

Rhys's Perry Mason is a veteran of WWI suffering from PTSD, in the midst of a divorce, and is taking care of his family's California farm by moonlighting as a private investigator for a notable attorney, embroiled in a horrifying case involving a kidnapped and mutilated baby in the same vein as the iconic Lindbergh kidnapping where the parents went from being innocent victims to prime suspects.

This Perry Mason masks the whiskey on his breath with a few dozen cigarettes while he takes out his rage and frustration through some rough sex with a more mature Hispanic groundskeeper who is a woman that both nurtures and antagonizes Mason in the right ways for his character.

He's hard-edged as can be, and frequently loses himself in vivid and unsettling flashbacks to the war.

“God left me in France,” Mason says in episode 3.

PERRY MASON is without a doubt one of the best dramas I've had the pleasure of watching, and the 1930's it realizes on the screen make it one of the most interesting. Mason and his go-pher Pete Strickland get involved in the “dirty cleanliness” of 1930's Hollywood while slowly becoming entangled in a bizarre Scientology-esque church, all while- as I mentioned- Mason deals with the very real ramifications of being a military veteran.

In the first episode he lights up a cigarette, to which a woman recognizes instantly is the mark of someone who fought in the trenches. Mason covers- and holds- the cigarette with his cupped hand, a trait picked up so that the enemy couldn't see the lit stoge and open fire. Mason carries his war-time experience everywhere with him, and these veterans aren't treated like glorified heroes. There's more Vietnam in this depiction of WW1 vets than the gung-ho “We beat Adolf” jingoism of another HBO masterpiece, BAND OF BROTHERS.

PERRY MASON also deals with police corruption, and the involvement of an African-American police officer, beat cop Paul Drake (Chris Chalk) who has been changed from his white counterpart in Raymond Burr's original series. Drake is attempting to work a respectable job to provide for his pregnant wife. He's a man of class, seen in the market in episode 3 sporting a fresh looking coat, fedora, and suit while his wife wears a dress with fur and pearls.

This is a far cry from the poverty we've seen similar do-gooder black cops put in (in HBO's own WATCHMEN for example). This also makes Drake being strong-armed into playing nice with the two crooked LAPD officers (Holcomb and Ennis) that much more alarming. Drake is well off, so being “bought” isn't an issue...but he's still a black cop. He's still at the mercy of his white co-workers, who have already done some nefarious wrong-doings, and have even threatened his wife and unborn child.

So there's a lot at play in only a few short episodes of PERRY MASON so far. It's an outstanding and beautifully detailed crime drama which you NEED to be watching.

PERRY MASON airs Sundays on HBO and is available through HBO Max.