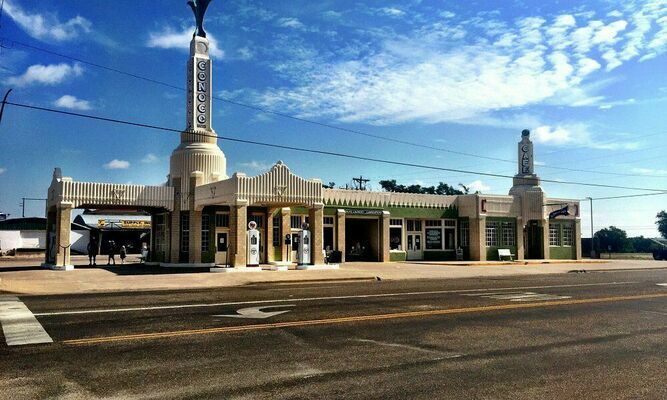 SHAMROCK, Texas – I dropped in at the U-Drop Inn with a friend, and I dropped out with a couple more. I was driving back home from a spring break trip to Amarillo, Texas, with a buddy of mine on March 16 when I veered off Interstate 40 and stopped in this dusty, tiny Texas town.

I had seen the U-Drop Inn, a vintage yellow- and green-colored gas station on old Route 66, in pictures. And if you’ve ever seen a good movie, you have, too. This building was the inspiration for Ramone’s shop in the 2006 hit Disney-Pixar film “Cars.”

Once upon a time, this station was an oasis for people traveling from Chicago to Los Angeles on the Mother Road. The joint boasted a diner, restrooms and plenty of fuel to get travelers to their next destination. Now it’s a tourist attraction.

The gas pumps haven’t worked in years, and the dining booths are empty. (There’s talk around town, though, that someone will be reopening the diner soon.) When my friend and I walked in the doors of the station that afternoon, the lights were off.

Large, glass windows illuminated the room. No fluorescent fixtures could compare to the natural light shining in. Sitting in the store that day were two ladies named Patsy and Oleta.

They work at the station, selling Route 66 T-shirts and Texas-sized refrigerator magnets to those of us traveling down life’s highway (at a slower pace, that is). We talked for the better part of an hour. Besides, it’d be impossible to talk for the worst part of an hour when in such good company. Patsy and Oleta welcomed us to Shamrock as if we’d lived there our entire lives.

We swapped jokes, traded compliments and talked about the history of the iconic roadway cutting through the heart of this rural retreat. The old cliché about shooting the breeze fits. We shot the breeze, and we hit the target every time. I can’t remember details of what we talked about. What we said wasn’t particularly powerful or even memorable. But it’s the kind of interaction that makes one feel welcome – that makes one feel at home and at peace. This encounter is a commentary on many topics. First of all, it’s a testament to the friendliness of West Texans.

They give warm welcomes to out-of-towners, even Okies. They themselves may not stray far beyond the Caprock, but they greet folks from all over. Secondly, it represents the ambition of small business owners along Route 66. When the road was one of the primary avenues connecting the eastern and western halves of the United States, business-owning families cared for weary travelers. This spirit is still alive today.

No, I wasn’t alive when the Mother Road was raising the country. But I’ve done my research. And I’ve visited Shamrock, Texas. Finally, it’s a reminder that, sometimes, taking the not-so-beaten path is the most rewarding way to travel.

If I’d stayed on I-40, I’d have never met these two friendly folks. If I’d kept on driving because I was running behind, I’d have never slowed down and seen a unique historical site. And if I hadn’t dropped in at the UDrop Inn, I’d have two fewer friends than I do today. Now let us consider the fact that, before the interstate highway system was created, folks had to take Route 66 through towns like Shamrock scattered all over the American Southwest.

They stopped at the U-Drop Inn. They stopped at countless other places just like it. And at each dot on the map, they met folks – nice folks, sweet folks, funny folks and friendly folks – like Patsy and Oleta. I don’t even know their last names. I didn’t need to ask. Friends know each other on a first-name basis. And thanks to Route 66, I’ve gained a couple more. You never know where you’ll make a new friend. All you’ve got to do is drop in.