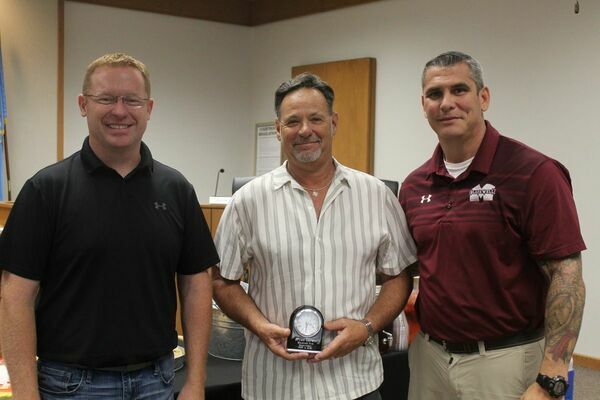 The Blackwell City Council met Thursday night to honor two longtime city employees, with one retiring and one eagerly looking forward to his next several years with the City of Blackwell.  The meeting began at 6 p.m. with the recognition of Blackwell Firefighter Bryan Cavett, who retired after 25 years of service.

A retirement party took place Friday afternoon in City Hall, where cake and punch were served. City Manager Jerry Wieland spoke fondly of Cavett, noting the hundreds of hours he spent on-call, away from his family, serving the public for years. Jerry Eubanks, the city’s public works director, then recognized Electric Department Manager Greg Sixkiller for his 35 years of service to Blackwell Public Power.

Cavett and Sixkiller, who said they are close friends, spoke together and reminisced on their time with the City of Blackwell. Both got sentimental and teary-eyed as they thanked their respective departments for their time.

Wieland and City Attorney Bryce Kennedy discussed the amendment, under which the city would pay Hays $1,500 more per month for the highest tier of service he offers. This would allow the city unlimited access to the agency, as well as having Hays on-call for any visits and reports. Kennedy said this was the same deal Enid had in place, and noted Enid’s business boom.

Council members said they agreed that the relationship with Hays had been profitable and worth Blackwell’s time. They unanimously agreed with the new terms. The Council then appointed Mitzi Neuman, Lynn Fields and Cindy Oard to one-year terms on the Blackwell Tourism Board.

The facilities authority approved a sub-lease agreement with the Kay County Free Fair Board for the county fairgrounds to be leased the second week in September for “fair week,” which was canceled last year because of the COVID-19 pandemic.