Review: HALLOWEEN KILLS is a bizarre ode to bloodshed 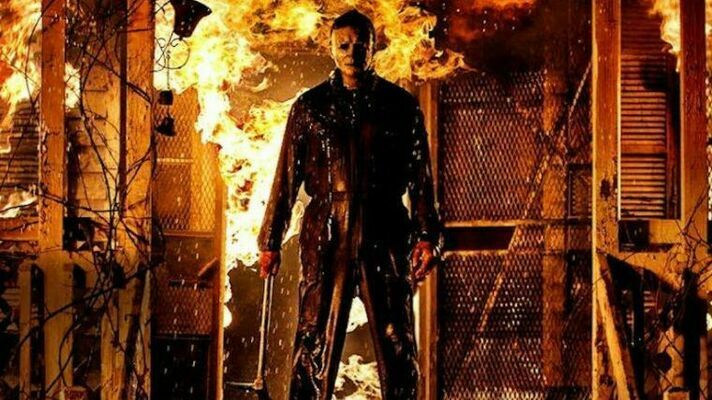 “The more he kills, the more he transcends. He’s the essence of evil.”

KILLS takes place immediately after the events of 2018’s HALLOWEEN, itself a direct sequel to 1978’s original horror masterpiece, ignoring the events of HALLOWEEN II and the several other films that followed.

Of course, when the Haddonfield Fire Department enter the burning house, they are assaulted by the still-living Michael, who continues his unrelenting quest of bloodshed. Michael, played by James Jude Courtney, looks more terrifying than ever this go-round, with his mask charred and burned by the fire, making him look like a more demonic, menacing, creature than a man.

Now, Laurie is trapped in the hospital tending to her wounds as the citizens of Haddonfield- including several survivors of Myers’ original 1978 massacre- rally a mob to hunt him down and put an end to the monster once and for all.

HALLOWEEN KILLS is a film that isn’t nearly as focused or innovative as the 2018 relaunch of the franchise, but what it lacks in the 2018 film’s sense of dread it almost makes up for in the bizarre final act that seems to recall, of all things, the franchise’s blackest sheep with Rob Zombie’s surreal 2009 HALLOWEEN II.

As the citizens of Haddonfield go nuts with the mob mentality of wanting to kill Michael- so blinded with bloodlust that they accidentally target another escaped mental patient in a shockingly tragic scene- the film spirals from slasher to, almost, a supernatural trip into Hell itself.

Jamie Lee Curtis is mostly relegated to a side-character, nursing her severe wounds in the hospital, but an exchange she has with the sheriff Frank Hawkins (Will Patton) explains her interpretation of Michael- he is not just an evil man, he is a transcendent being of pure evil itself. Not the concept of evil, but the actual form. A being so absolute in his drive to kill that he feeds off of fear, and spreads it like a sickness wherever he goes.

The final scene, hauntingly, draws a parallel to Laurie and Michael that is especially interesting given that the last film to address them as two parts of a whole was Zombie’s aforementioned 2009 HALLOWEEN II.

As fans of the series know, in the original HALLOWEEN II (1981) it was revealed Michael is obsessed with Laurie because she is actually his baby sister. By ignoring the original 1981 follow-up, HALLOWEEN (2018) does away with the relation by blood, but seems interested in revisiting it in spirit.

Those that are interested in the film for the kills will no-doubt be properly satiated. Michael dispatches characters with grotesque, awesome, rage. The entire sequence of him slaughtering an entire squad of firefighters is stomach-turning, and that’s just the first few minutes.

HALLOWEEN KILLS opens up with a flashback to the night of the original 1978 massacre which is sure to tickle the fancy of hardcore franchise buffs, mostly because it is shot and staged so well that it seems like it was an actual part of the original film, including Dr. Loomis, resurrecting the character played by the late Donald Pleasance with (chillingly believable) prosthetic trickery.

Of course, no HALLOWEEN feature is complete without the music. Writer/Director/Horror God John Carpenter returns here with some electric and chilling new tracks which give the film a certain unexpected depth of atmosphere that couldn’t be replicated by anyone else.

David Gordon Green returns to direct from his 2018 film, and his handling of horror-thrills is just a joy to look at. The film looks exceptional in virtually every aspect.

The series will come to a close with next year’s aptly titled HALLOWEEN ENDS, due out October 14, 2022.