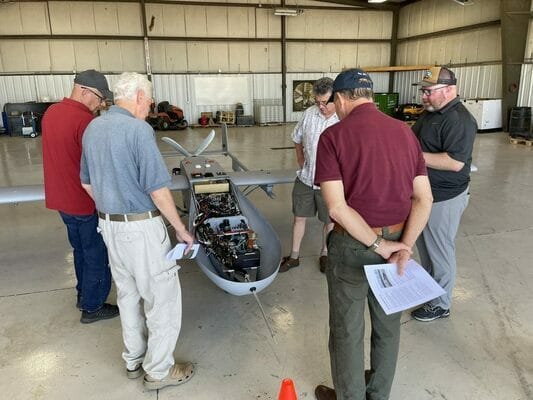 The United States Department of Energy's Atmospheric Radiation Measurement project is collecting    data that will change the face of climate- and weather-based research – and the project is taking place at the Blackwell-Tonkawa Airport.

Led by the ARM Aerial Facility, researchers have conducted low-altitude, low-speed drone flights from the airport to the U.S. Department of Energy's Southern Great Plains atmospheric observatory just 13 miles away.

Representatives from the Pacific Northwest National Laboratory include: Tim McLain, manager of the AAF and director of flight operations; Pete Carroll, UAS operations lead of the ARM Aerial Facility; and Beat Schmid, manager of the ARM Aerial Facility's Atmospheric Sciences and Global Change wing. They spoke to local dignitaries and officials, showing them the aircraft, their capabilities and the nature of the research.

The ARM Aerial Facility has long had its sights set on adding UAS to its observational capabilities to help meet the specific data needs of the ARM user community. According to Carroll, ARM’s ArcticShark UAS is rated as “Group 3” (moderate-sized, about 14 feet long and 650 lbs.) and propelled with a rotary engine and a four-blade prop.

One of the AAF's challenges is re-engineering instruments to be reduced in size and weight for aircraft. The instrumentation on a UAS must be further miniaturized.

Jason Tomlinson, who leads the AAF’s engineering efforts, said the focus is on getting data quality and the confidence in that quality by the ARM user community. Recently, data collected from the Oklahoma site has been used to improve cloud detection.

The SGP is ARM’s oldest and largest observatory. In May 1992, the SGP recorded its first data.

Today, ARM has a coordinated network of six observatories ― three in fixed locations and three that are mobile. A fourth fixed observatory closed after operating for almost 20 years.

To ARM planners, north-central Oklahoma seemed ideal, officials said. The topography is relatively flat, with simple features. It has four seasons and a wide range of atmospheric conditions. It has roads, so logistics could run smoothly.

ARM designed the remote location to be an outdoor laboratory dedicated to continuous measurements, reliable data for researchers and modelers and instrument development.

Since 1992, the SGP has hosted at least 300 field campaigns. Some have lasted years, and some lasted a few weeks.