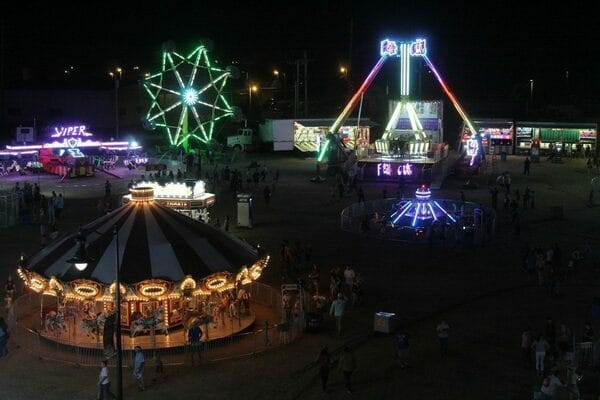 Blackwell closed the book on the 105th annual Kay County Free Fair on Sept. 18 as the rides were loaded up, food trucks were hitched and animals were taken home following a week of excitement that began Sept. 12.

“This year was another outstanding job by our fair board,” City Manager Jerry Wieland said. “I believe the fair is a crucial part of our community, and I love the fact that it brings people from all over to Blackwell.

“We here at the City of Blackwell cannot thank the fair board enough for their efforts in delivering yet another great year.”

Officials with Weee Entertainment, which provided this year’s rides, said they were thrilled with the week’s outcome.

“The Kay County Free Fair was a great success,” officials said. “The weather cooperated, and we appreciate everyone who came out and enjoyed the fair. We are looking forward to next year.”

The Kansas-based company brought a record-setting 18 rides and sold wristbands and tickets for riders of all ages.

Blackwell citizens took to Facebook to voice their feedback.

Kelly Grove said the fair was “definitely better this year compared to last year” but noted there was “a lot left to be desired.” Her criticism of the 2022 fair was levied against the wristbands for rides, adding that she thought there would be more retail booths and events.

Emily Prince said she “loved it” this year, but wished there were more teen and adult-focused rides.

Lurae Horse said the fair was “super awesome” but food was “super expensive.”

Top of Oklahoma Museum Director Melissa Hudson said she is “looking forward to next year.”

Vendor Richard Allen said that, as a vendor, this year’s fair was “one of the worst” his booth has attended. Allen said there were “more food vendors than events twice [the fair’s] size,” and the food items were too similar across the board. Allen also said the maintenance of the bathrooms and grounds “left a lot to be desired” as well, with specific attention being directed at the Event Center.

Allen echoed other sentiments about the price of the entertainment, saying: “The carnival cutting kids off at 10 p.m. and expecting them to buy tickets on top of over priced bracelets to continue to ride for another hour was ridiculous.”

The fairgrounds’ livestock pavilion and horse arena hosted the local livestock shows for 4-H and FFA youth, as well as mutton-busting and a petting zoo.

The Northern Oklahoma College Roustabouts performed at the fair as musical guests along with the Blackwell High School band and local artists Jory Blagden, Five Year Gap, Morgan Reynolds Band and others.