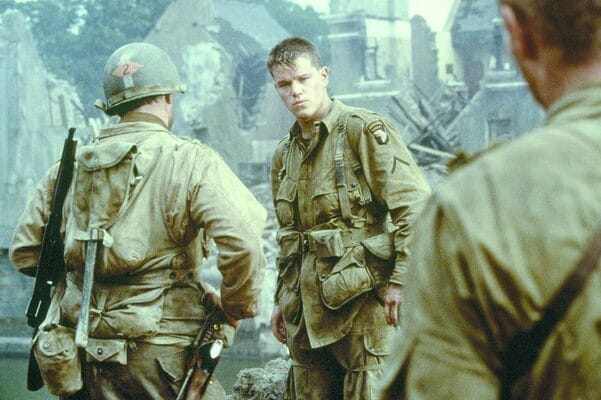 “Grandpa, were you a hero in the hero? And Grandpa said no…but I served in a company of heroes."

Veteran’s Day is this Friday, November 11, and of course that means Blackwell residents will be lining the streets for the annual parade to honor the men and women serving in our nation’s military services. In honor of that, I’m going to rattle off my top five war films (obviously with some series thrown in for measure).

Number five, to me, would have to be Steven Spielberg’s 1998 film SAVING PRIVATE RYAN.

It’s really a fantastic, brutal, and emotional movie that gives Tom Hanks one of the best features of his entire career. The cast is also all-star and constantly surprises me when I see it.

SAVING PRIVATE RYAN is set during the Normandy Invasion and follows Army Ranger Captain John Miller (Hanks) who is sent with his squad (starring character actors like Tom Sizemore, Barry Pepper, Giovanni Ribisi, and Vin Diesel) to find a missing paratrooper by the name of James Francis Ryan (Matt Damon) who is the last surviving brother of four military servicemen, as part of the “Sole Survivor Policy”, and must be pulled from duty and returned home safely.

The film grabs you by the avocados from it’s opening minutes of extreme chaos and graphic violence depicting the very real, very accurate, gruesome landing of Omaha Beach and doesn’t pump the breaks till the tearful finale.

This iconic, game-changing, 10-hour miniseries was aired in 2001 and is a prime example of why the HBO network is a cornerstone for adult entertainment and television. Also set during World War II, “Band of Brothers” follows “Easy” Company, 2nd Battalion, 506th Parachute Infantry Regiment of the 101st Airborne Division through WWII from D-Day to the war’s end with Japan’s surrender. The series is like slipping on a warm pair of slippers and sitting by the fire- it’s nostalgic, comforting, reassuring, and also very smart and tasteful with it’s depiction of war and violence.

I have never cried at a single episode of television more than I have at the series finale of this.

Number three is BLACK HAWK DOWN, a film that breaks the mold here from World War II dramas and instead is set during the catastrophic failure of the 1993 Mogadishu raid which aimed to capture terror-faction leader Mohamed Farrah Aidid.

This gritty, harrowing, survival horror film was directed by Ridley Scott and is perhaps the most bleak of any mainstream war drama I have se Starring Josh Hartnett, Ewan McGregor, Tom Sizemore, Eric Bana, William Fichtner, Sam Shepard, and Nikolaj Coster-Waldau, this sweeping epic will have you holding your breath until the credits begin to roll. I had never seen this film or known about the Battle of Mogadishu until a few years ago and I was completely enthralled.

Of course, with Ridley Scott and that kind of cast, what else could someone expect? I used the term survival-horror earlier to describe it, because this isn’t your traditional “war hero” spectacle, and for that it definitely shoots up this list.

Number three is “The Pacific”, the sister/companion series to “Band of Brothers” that follows the United States Marine Corps’ actions in the Pacific Theater of Operations during World War II.

The series is radically different than “Band of Brothers” In terms of presentation and focuses on Robert Leckie, Eugene Sledge, and John Basilone in the 1st, 5th, and 7th regiments of the 1st Marine Division. “The Pacific” is less cute and warm than “Band of Brothers”, and highlights the harsh, disgusting realities of the Pacific Theater and the hardships the Marines went through as they fought their way from island to island attempting to bring the battle to Japan.

“The Pacific” is, to me, the grown-up version of “Band of Brothers” and is much more thoughtful and contemplative than it’s sister series. It is amazing. “The Pacific” stars James Badge Dale, Rami Malek, John Seda, Joseph Mazzello, Noel Fisher, Josh Helman, Jon Bernthal, and several others.

Number one is my personal favorite war movie of all time, FLAGS OF OUR FATHERS, directed by Clint Eastwood. This 2006 drama is about the five U.S. Marines and Navy Corpsman who raised the flag on Iwo Jima (the iconic image that is synonymous with the Marine Corps) and the effect that it had on their lives.

This film is hard to classify as a strict “war movie” because it’s also a very tear-jerking drama that is a bit ahead of it’s time. Starring Ryan Phillippe, Jesse Bradford, Adam Beach, John Benjamin Hickey, Paul Walker, Bary Pepper, Robert Patrick, Neal McDonough, Jamie Bell, and John Slattery, this movie perhaps hits me the hardest out of all the media listed here. Clint Eastwood’s insanely personal art of story-telling amplifies and deepens the content on such a human level that the gory, ferocious battle sequences on Iwo Jima have the same intensity as the scenes of the flag-raisers going through their personal hells back at home in America.

Eastwood followed up this movie with a sister-film, LETTERS FROM IWO JIMA which is just as significant and important as “Flags” and it told through the Japanese perspective of the battle.

Honorable mention goes to Mel Gibson’s WE WERE SOLDIERS, THE BRIDGE ON THE RIVER KWAI, THE HURT LOCKER, and A BRIDGE TOO FAR.