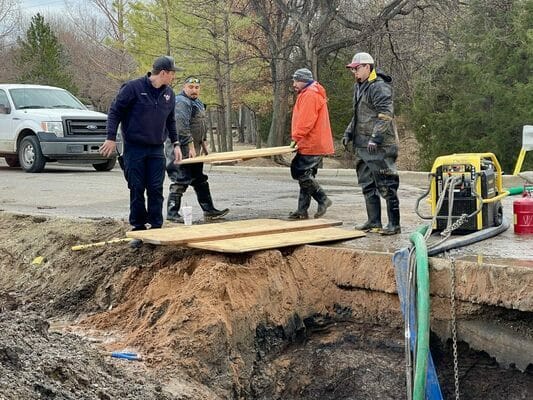 Rapidly fluctuating temperatures and an aged pipe left half of Blackwell without water pressure Friday.

The Blackwell Water Department was called out to Saralyn Drive and Ferguson Avenue for a 12-hour day in waist-deep water repairing a water line break.

Roman Stevens, Blackwell Water Department’s distribution and collections manager, said he and his men were called out to Saralyn and Ferguson at 4 a.m. after residents complained about low water pressure in the area.

The line on Ferguson is one of Blackwell’s most crucial lines, and the leak was spotted by two of the water department’s workers.

They noticed that the water level in the small creek at the intersection was higher than usual.

“Once we were able to pinpoint the leak, we gathered everyone to come up with a plan,” Stevens said.

“We got it all figured out around 5:10 a.m. and started digging. The more we dug, the more water we dealt with. Finally, we found a crack that ended up being 62 inches long. To fix something that massive, you have to expose it, cut it and replace it with another pipe. “While all of this was happening, we had to have our pumps running, shutting down valves and take other calls.”

Along with city departments, Blackwell also received aide from the City of Pawhuska, the Oklahoma State Department of Health’s Regional Medical Response System and the Oklahoma Emergency Management Association.

The City of Blackwell’sFacebook page paid tribute to dispatch workers and desk-bound employees at both City Hall and the Blackwell Police Department for taking calls to discuss the water issues with residents throughout the day.

The water line was repaired and restored at 6p.m. Friday night.

“Friday’s water break once again showed the resolve and dedication that our water department has to the City of Blackwell. Many assisted in these efforts, but our water department led the charge. Not even the austere conditions and 13 hours could stop this department from fixing this main break and restoring water back to the residents. I am so proud to work with the men and women who work for this city.”