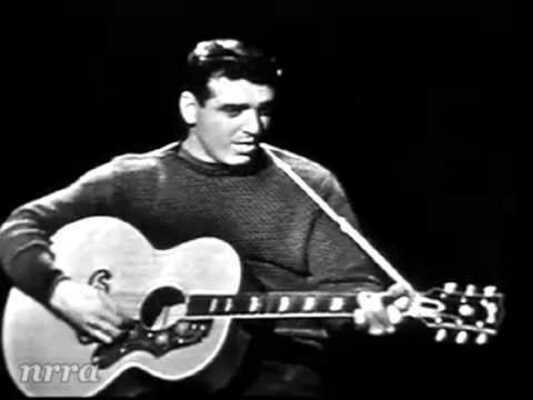 Editor’s Note: This is the second installment in The Journal-Tribune’s series “Famous and Forgotten: The Untold Stories of Entertainers from Northern Oklahoma.” The series highlights entertainers of the past who had connections to the region.

From the same family in a tiny Grant County town came a one-hit wonder pop singer and a competitive vocal trio: Mark Dinning and the Dinning Sisters. To people under the age of 60 or so, those names may not ring a bell. But people who danced the night away in the 1940s, ‘50s and ‘60s saw those names on the covers of popular musical albums and the silver screen.

The Dinning family got its start in northern Oklahoma and made its mark on the entertainment world.

Mark Dinning was born in Manchester, about 57 miles northwest of Blackwell, on August 17, 1933. His birth name was Max Edward Dinning. Unclear is how long Dinning, the youngest of nine children, lived in Oklahoma. He and his family moved to Nashville, Tennessee, the home of country music, sometime during his youth. “Dinning at first turned down a chance at a singing career, preferring to remain on the farm,” the Associated Press reported after his death in 1986. “His sisters, however, encouraged him to use his talents and he later signed with MGM after three years in the Army.”

In 1957, he signed a deal with record producer Wesley Rose under the stage name Mark Dinning. He didn’t have much success until 1959, when a heartbreaking song his sister Eugenia “Jean” Dinning wrote put him at the top of the charts. That song was “Teen Angel,” which held the No. 1 spot on the Billboard Top 100 for weeks, according to The Los Angeles Times.

The song tells the story of a young couple whose car stalled at a railroad crossing. The girl ran back to the car to retrieve the boy’s high school ring, and she was struck and killed by a train.

The song is performed from the boy’s perspective as he asks, almost prayerfully, “Teen angel, can you hear me?”

The morbid nature of the song drew scorn. According to The Daily Doo Wop musical history website, some radio stations in the U.S. and the U.K. banned the tune t that didn’t stop it from being a hit.

It sold more than a million copies, and it was later featured in the “American Graffiti” movie soundtrack as well. “[Jean] Dinning was inspired to write the song – which was recorded by her brother Mark – after reading a magazine article about juvenile delinquents,” Rolling stone wrote in an obituary about Jean Dinning after her 2011 death.

“The piece suggested that good teenagers should be called teen angels. ‘Being a songwriter, I said, ‘That’s a title,’’ Dinning said in The Billboard Book of No. 1 Hits. She played the song for her brother Mark at a family dinner, and he recorded it that night.” Dinning continued to record, but he never again found the success he did with “Teen Angel.” Complicating matters, his alcohol addiction kept him from performances and contributed to his fading from public view, sources say.

Dinning died in 1986 at the age of 52 at his home in Jefferson, Missouri. He had recently performed a show, and his wife believed he suffered a heart attack, the AP reported. Few may remember Dinning from his time in Oklahoma, but Amorita resident Verne Clark is one.

Clark, who grew up in the small Alfalfa County town about 23 miles west of Manchester, met Dinning as a child in the early 1960s. Clark’s family had a close friendship with Dinning’s mother, Bertha. She spent summers at the Clark family’s home, and when her stays were over, her family came to visit and take her home. Clark recalled spending an afternoon playing with Mark. Clark had a parachute leftover from his Fourth of July fireworks, and he and Mark spent the afternoon tossing it around. “He could throw it way up in the air,” Clark said.

“He was just my best buddy for that afternoon. At that time, five or six years old is how old I was, and it didn’t matter to him if I was just a little snot-nosed kid. He was just having fun playing with me. “Us kids just loved him. He was just the sweetest guy. We didn’t know he was the guy who sang ‘Teen Angel.’ He was just a guy who came to visit us and was just fun to be around.”

A year or two later, Clark found one of Dinning’s albums. “With dad being an RCA dealer, we always had an RCA stereo around with lots of records,” Clark said. “All of a sudden, one day it hit me: ‘Hey, that guy on this album is that guy that came here that day and played.”

Mark Dinning wasn’t the only family member to obtain musical fame. Four of his sisters, also hailing from Manchester, at various times were part of the Dinning Sisters trio, which produced several hit songs and sang in two Disney productions. Ella Lucille “Lou,” Eugenia Doy “Jean” and Virginia Moy “Ginger” Dinning were the first to form the Dinning Sisters trio. Lou was born Sept. 29, 1920, and Jean and Ginger were born as twins Sept. 29, 1924. They grew up singing together in church and performing in amateur singing contests, according to www.allmusic.com.

By 1939, they had a radio program on radio station WENR in Chicago. Their first national exposure came with an appearance on “National Barn Dance,” a radio program hosted by WLS, Chicago and NBC’s Blue Radio Network. “With little experience but a lot of ambition, the young ladies left their Oklahoma hometown and traveled to Chicago, where they auditioned for NBC radio,” according to allmusic.com. “They were hired and remained for seven years, and ultimately became the highest paid radio act in the Windy City.”

In 1943, the sisters signed a record deal with Capitol Records, which sought to raise up a group as popular as the topselling Andrews Sisters on the Decca label. While they never got quite as famous as the Andrews Sisters, known for the hit “Don’t Sit Under the Apple Tree,” the Dinnings had success of their own. Rolling Stone magazine reported that the trio “scored huge national hits in the 1940s with ‘We All Fell In Love on the Greyhound Bus,’ ‘A Pretty Girl Milking Her Cow’ and the ‘Buttons and Bows’ from the soundtrack to the 1948 Bob Hope and Jane Russell movie ‘The Paleface.’”

In 1946, the group lineup changed, as Lou was replaced by Jayne Bundesen. But in 1952, younger Dinning sister Dolores May “Tootsie” Dinning replaced Bundesen, restoring the trio to all-Dinning lineage. The group performed in the 1947 animated Disney production “Fun and Fancy Free” and the 1948 production “Melody Time.” The group didn’t churn out many hits in the 1950s, and in time, it fell apart. “Marriages and children eventually demanded the act’s attentions, but the family remained involved in music, from Jean Dinning writing the song ‘Teen Angel’ to the sisters’ nephew Dean playing bass for alterna-rockers Toad the Wet Sprocket,” according to www. allmusic.com.

Lou Dinning married Don Robertson, a singer and songwriter, and the two recorded demos for Johnny Mercer and others through the late ‘50s. By all accounts, Dolores had the longest and most successful career. She helped start The Nashville Edition backup quartet, which was best known for its performances on the TV show “Hee Haw.” The group performed on hit songs with George Jones, Tammy Wynette, Brenda Lee, Marty Robbins, Elvis Presley, Frank Sinatra and more, according to Wikipedia. They were often uncredited, however. Lou, Jean and Ginger performed in 1987 at the Grand Ole Opry and other venues, according to Wikipedia, and they produced a Gospel album with notable backup ensemble The Jordainaires in 1993, “Rhinestone Christian.” Lou died in 2000, Jean died in 2011, Ginger died in 2013 and Dolores died in 2015. Clark, whose family received Christmas cards from Dolores up until about 10 years ago, said he’ll always remember having “wonderful times” with the Dinning family.