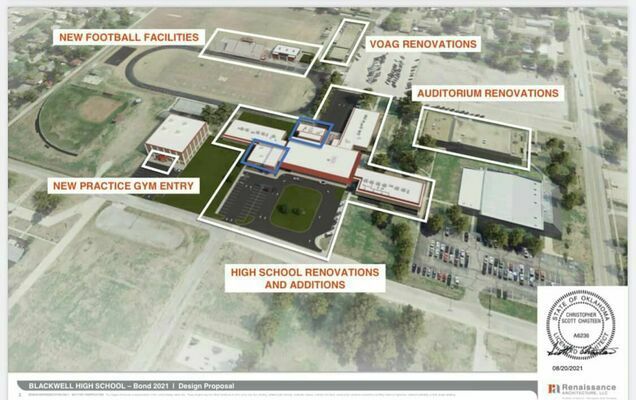 Educators, parents and voters held their breath Nov. 9 as the Blackwell Public Schools bond election ended with an overwhelming 80 percent of voters opting for a sizable redesign and modernization project for Blackwell High School.

The $23 million bond will be paid off over the course of 15 years. Construction work is expected to begin in October 2022 at the latest, Blackwell Public Schools Superintendent Shawn Haskins said.

“We were told to expect this bond to take at least three elections to pass,” Haskins said. “[It is] needless to say that everyone was relieved to see the community turn out in the thousands to vote, with 80 percent of that vote being for the bond.”

Haskins said a 60 percent approval rate was required for passage, and that 80 percent was icing on the cake.

“The citizens of Blackwell showed up to support the kids, and that’s really all any of us wanted to do,” Haskins said. “Blackwell’s campus used to be so far ahead of everyone else’s, and I think with almost every surrounding school getting improved facilities, it was a matter of time before the people here noticed that and wanted that for the kids in their school system. Blackwell’s students are the best, and now our facilities can reflect that.”

The project is expected to be completed in two years. Haskins said he is targeting completion to coincide with Homecoming 2024.

The bond will be an 11.88 percent property tax increase, which will begin with the 2023 tax cycle.

Homeowners can calculate the exact cost of their property taxes by visiting the Kay County Assessor’s website, https://www.courthouse.kay.ok.us/154/County-Assessor.

The bond will cover a wide range of modernizations and improvements to bring the high school into the 21st Century, officials said. The project will include new front doors, windows, ceilings and paint for the agricultural and wood-shop building, which was built in the 1970s.

It also includes a new entry canopy, interior and exterior paint, front sidewalks and heating equipment for the practice gym, built in 1968.

The south-side football facilities, built in the early 1950s, will have handicap-accessible ramps and seating as well as new aluminum seating, a new press box and a new building that will house restrooms, a concession stand and a locker room.

The auditorium, built in the late ‘60s, will have handicap-accessible restroom renovations, a new storefront, new doors, new paint in the lobby, ceiling work in the lobby and new carpet and seating in the auditorium. It will also have new sound and lighting equipment, new paint and a new HVAC system.

The high school’s main building, built-in 1962, will have a new secure entryway and office suite, kitchen area, handicap-accessible ramps and technology for the library.

The roofing on the B and C wings of the school will be completed. So will the high roof on the auditorium and the roof on the agriculture and wood-shop building. These roofs were not completed during a roofing project in 2018.