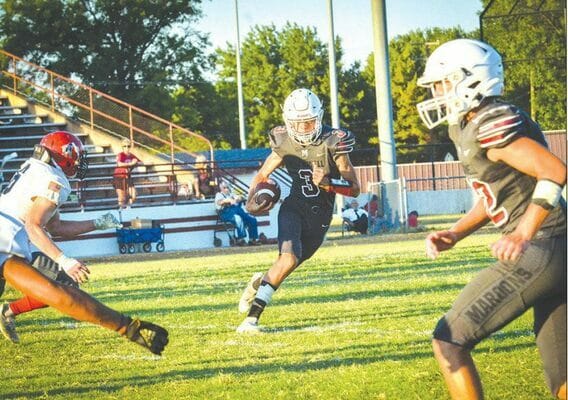 The Blackwell Maroons started their 2022 season by outlasting the OKC Patriots in a 7-6 defensive battle.

The offense played a very clean game for the beginning of the season with no false starts or drive-killing penalties to take note of.

The game was a backand-forth defensive struggle until the second quarter when Sophomore Quarterback Kevin Rios connected with Senior James Tripp for a 12-yard touchdown pass in the east end zone. It was Rios’s first varsity touchdown pass, after being injured in the first game of the 2021 season and missing the rest of the season.

Gustav Gregersen kicked the PAT, and Black-well took a 7-0 lead. After trading punts, the Patriots stripped the ball from running back Zane McDonald deep in Blackwell territory and returned it for a touchdown.

Senior DL JD McCLeary busted through the Patriots’ front line and blocked the PAT kick, bringing the score to 7-6 Blackwell, and the score remained unchanged the rest of the game. The remainder of the game saw Rios, Freshman Quarterback Zaden Frederick, and Running Back Zaine McDonald gash and gouge the Patriot defense in the rushing game.

Frederick also completed his first varsity pass, but every drive stalled and the Maroons were unable to punch it in the end zone. The Patriots drove deep into Blackwell territory several times, but a smothering defense shut down the patriots and pushed them out of scoring position each time.

Senior James Tripp’s name seemed to be on repeat on the PA system all night as he wreaked havoc in the patriot back-field.

GavinSchuetz recorded a first-quarter interception, and maroon defenders EyzicBurke and Skyler Landwehreach dropped interceptions they most likely would have returned for touch-downs.

Coach Parker stated he was very satisfied with the game, and he feels the players have bought into the program, but his team has a lot of work to do. Coach Parker stated it was a clean game with good execution by the Maroons, but there were times when a lack of execution and busted plays cost the Maroons points. Coach Parker also stated he was proud of the defense which swarmed all evening and had 8 or 9 maroon defenders on nearly every tackle. T

he Maroons have a long road trip on Friday, September 9, as they travel to take on the class 3-A Stigler Panthers