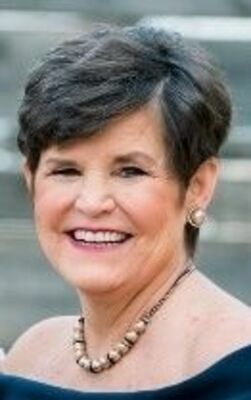 Misti Lynn Moyer Leeper, 62, a resident of Oklahoma City went to be with the Lord on April 11, 2021. She passed at home surrounded by her family after a long battle with metastatic breast cancer.

Misti was born on November 26, 1958 in Blackwell Oklahoma to Wilber (Bill) and Mona Moyer. The only girl in the family with three brothers; Monte, Mick, and Matt. She attended Blackwell Public Schools through her whole life and in high school was involved in basketball, softball, track, band, and cheerleading. She was a proud Maroon and embodied Maroon Spirit. She went on to attend Oklahoma State University where she was a member of the Kappa Alpha Theta sorority.

She left OSU to graduate from Southwestern Oklahoma State University as a Doctor of Pharmacy. She moved to Oklahoma City, married William Leeper, and had two sons Kale and Kolby. They were the light of her life and she instilled in them a love for family and cheering loudly at sporting events. She was the glue that held her family together and was always cheering on and supporting her nieces and nephews as only she could.

She maintained throughout her life a relationship with her BHS high school class of 1977, her Theta sorority sisters, her SWOSU peers and professors. She could be found cheering on the OSU Cowboys most Saturdays. In 2015, she reconnected with the love of her life Cary Whitlock who shared an undying love/hate relationship that all Cowboy fans know is a part of supporting OSU athletics.

Together they traveled the world and made a new family made up of their kids, extended families, and friends. To be someone’s first love is nice but to be their last is beyond perfect. Cary and Misti were perfect together. In January of this year Misti found out that she was going to be a grandmother for the first time when her son Kolby and his wife Ashley announced that they were having triplets. It was her wish to make it long enough to meet her grandchildren; Leo Allen Leeper, Charlotte Lynn Leeper, and Elenore Dawn Leeper. Although she will not get to meet them here on earth, they are blessed with a guardian angel in heaven.

Misti was preceded in death by her father Wilber Moyer.

A sunset celebration of her life will be held at Quail Spring United Methodist Church at 14617 N. Pennsylvania Ave in Oklahoma City on April 17, 2021 at 6:30pm. It will be streamed lived on the church’s Facebook page for those who cannot attend. In lieu of flowers the family request that you make a donation to the Blackwell Public School Foundation 201 East Blackwell in Blackwell, OK 74631.