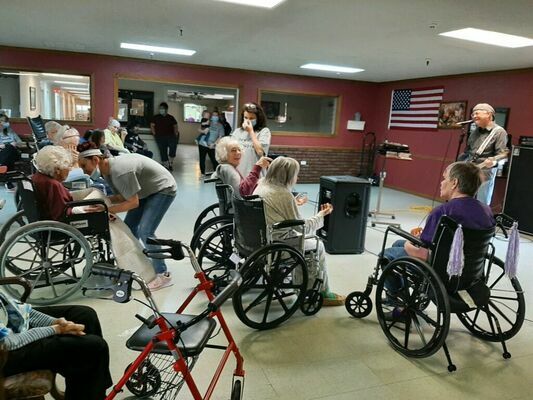 For the first time in more than a year, residents at Hillcrest Manor Nursing Home on Thursday were able to hear a live musical performance. Several residents at the local nursing home tapped their feet, clapped and sang along to music by nursing home administrator David Carey, who plays the bass guitar and sings.

“It was so much fun,” said Amanda Lamb, a dietary manager at the nursing home. “We saw residents’ personalities come out.” When the coronavirus pandemic began more than one year ago, facilities such as nursing homes locked down and barred visitors from entering.

But now, as COVID-19 regulations are eased across the nation, nursing homes are returning to “normal.”

“Nobody took a break,” she joked. In Carey’s repertoire for the day were “Help” and “A Hard Day’s Night” by The Beatles, “I Won’t Back Down” and “American Girl” by Tom Petty, and “That Thing You Do” by Cheap Trick.

Carey has played at other nursing homes before. When one Hillcrest nurse recently suggested he play for their residents, he took the offer seriously.

“He has a really good voice, and he played along perfectly,” Lamb said. Nursing home staff used the event as an opportunity to help some residents get up out of their wheelchairs. Some residents danced with staff members, and others tried to join Carey at the mic.

“It didn’t feel like work,” Lamb said. “These residents, they say we’re their family, and they’re just as much our family. We come to work with them, and we love to interact with them.”

Residents weren’t the only people at Hillcrest who joined in on the fun.

“He’s a great boss,” Lamb said. “We were just giving back to him as he gives back to us.” Given the overwhelmingly positive response from residents, Lamb said nursing home staff members hope to have more musical events in the future. “We got hit pretty hard during COVID with lockdowns,” she said. “This has been a light at the end of the tunnel.”