Walk of Heroes in Newkirk honors Veterans near and far 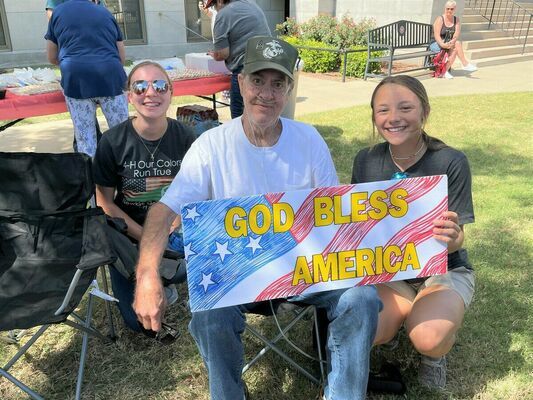 Newkirk’s Main Street was covered in American flags on Sunday, and the Stars and Stripes billowed in the gentle breeze leading to the grounds of the Kay County Courthouse. That’s where the Walk of Warriors Project was officially unveiled, honoring the men and women who have served in the United States military.

John Gerian, seen here, is a retired United States Marine Corps Sgt. Major who served in Vietnam and Operation Desert Storm. He took a photo with members of the Kay County 4-H who assisted with Sunday’s grand opening of the Walk of Warriors in Newkirk and went around the crowd getting photos with the veterans in attendance

The walkway is comprised of more than 500 names of veterans from the U.S. Army, Air Force, Coast Guard, Marine Corps, Navy and National Guard. The path leads to the Kay County War Memorial, where helmets rest on guns, honoring America’s soldiers. The Walk of Warriors Project began in 2020 as part of the Newkirk Pathway Project from the Newkirk American Legion Auxiliary and the City of Newkirk.

The project was started thanks to Newkirk teen Hannah Cross, a member of the Kay County 4-H. The American Legion Riders were present before the National Anthem was performed, serving as a prelude to Cross’s speech at the ceremony. Following her words, a band played a medley of the Armed Forces hymns, allowing veterans from each branch of the military to stand when their song was played. The walkway was placed by Rick Scott Construction and Kyler Construction.

“I interviewed several veterans and got to hear their heartbreaking and heartwarming stories from their time in the military,” Cross previously told The Journal-Tribune. “After securing money through a federal grant, I worked with the American Legion and City of Newkirk to make sure these veterans would be honored for years to come.”

Funds raised from selling the pavers went to the project and to sponsorships for high school students to attend Oklahoma Girl’s State. Officials estimate that more than $37,000 were raised for the project. Cross said more pavers will be offered soon, allowing additional families and loved ones to purchase a spot for veterans.